People have been writing travel logs since antiquity. Travellers recorded their experiences for several purposes. These could have been practical – as "instructions" for the expedition, as well as sentimental or even literary – as memories and observations from the places they discovered or visited. 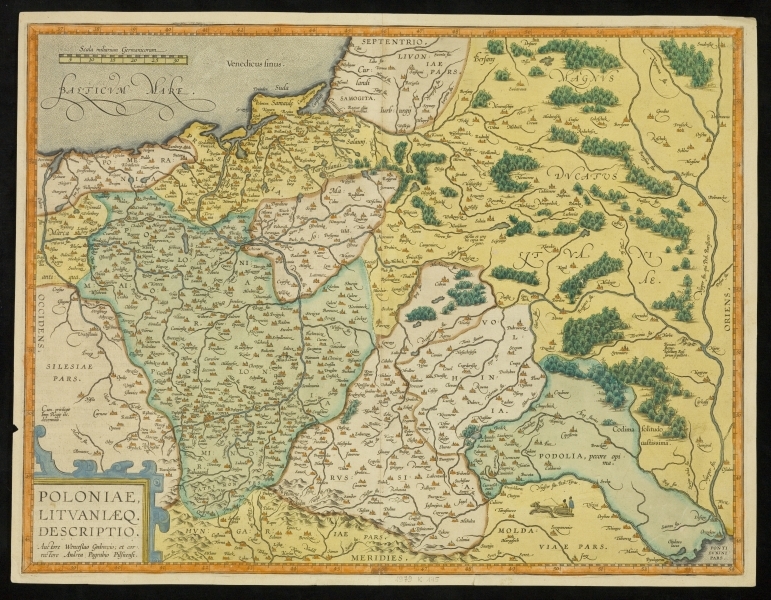 Baroque art arrived in Poland and began to thrive at the turn of the 16th century. This period was marked by the great influence of the Counter-Reformation and the actions of the Jesuits in opposition to the Protestant Reformation. At the same time, it was a time of "Sarmatism" ubiquitous among Poles. It brough with it its own set of customs, behaviours and elements of culture and art. All these moral changes are traceable to the contemporary man, largely thanks to the remnants of specific genres of literature that were created at the time. These include diaries, logs as well as travel books, also known as itineraria. Thanks to the latter, you can not only learn about the topography and appearance of the visited places, but also get to know the inhabitants, their habits and legends passed on to the travellers.

The first Hungarian travel book described a journey through Poland and then through Western European countries. Its author, a Hungarian teacher and later Calvinist pastor Márton Csombor, set off on 29 May 1616 from Eperjes to Gdańsk to study at a renowned local school. Along the way he visited several dozen larger and smaller Polish towns and cities. After graduation, he set off to visit Denmark, the Netherlands, England, France, Germany and the Czechia. On the way back, his route ran across Silesia: Wrocław, Bytom, Racibórz and Kraków. It ended in Bochnia and Grybów, from where he reached Hungarian soil in August 1618. Just a few months after returning home, Csombor started working on the accounts of his travels. In the meantime, he was the headmaster of a school in Košice and was ordained as a pastor. "Europica Varietas" – the first Hungarian travel book, which is an account of Csombor's journey, was published in 1620 in Košice. Its author died two years later during a cholera epidemic. 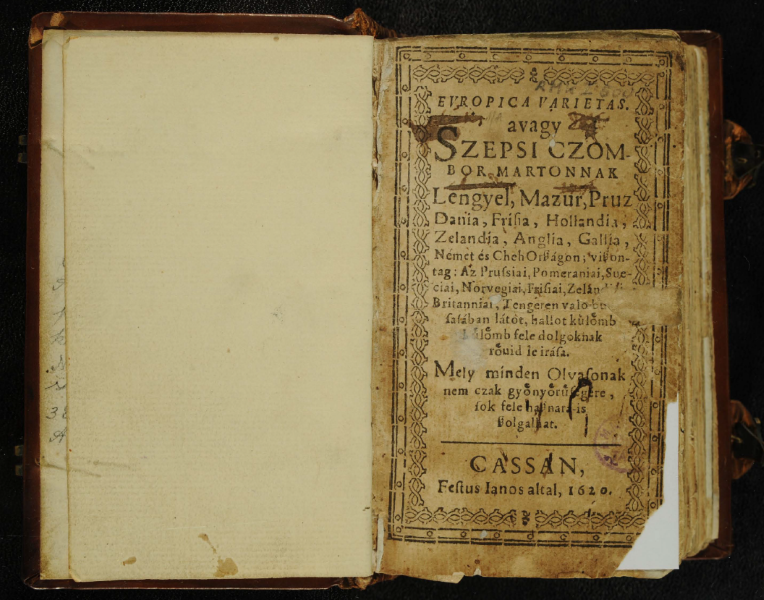 In his introductory description, Csombor states that Poland is the land that was previously known as Sarmatia. In this way it refers to the then functioning belief of the genesis of the Polish state. It describes which lands the country bordered: Hungary in the Carpathian Mountains, White Ruthenia to the east, Silesia to the west, Lithuania and Prussia to the north. Describing the country's geography, he mentions major rivers and natural resources. As most important Polish cities he cites Kraków where the treasury was located, Sandomierz, Warsaw – as the place where the king stayed most often, Gniezno with the grave of St. Wojciech, Czestochowa, already famous for its pilgrimages, Poznań as an important trade centre, Piotrków – the seat of the Sejm and the tribunal where cases from Wielkopolska and Mazowsze were judged; and Jarosław and Lublin as town known for their fairs.

During his entire journey both to Gdańsk and back home, Csombor visited 41 Polish cities and towns. The account of the journey was divided into chapters based on the regional division of the country, which include the cities in Wielkopolska, Mazowsze, Prussia, and Silesia. 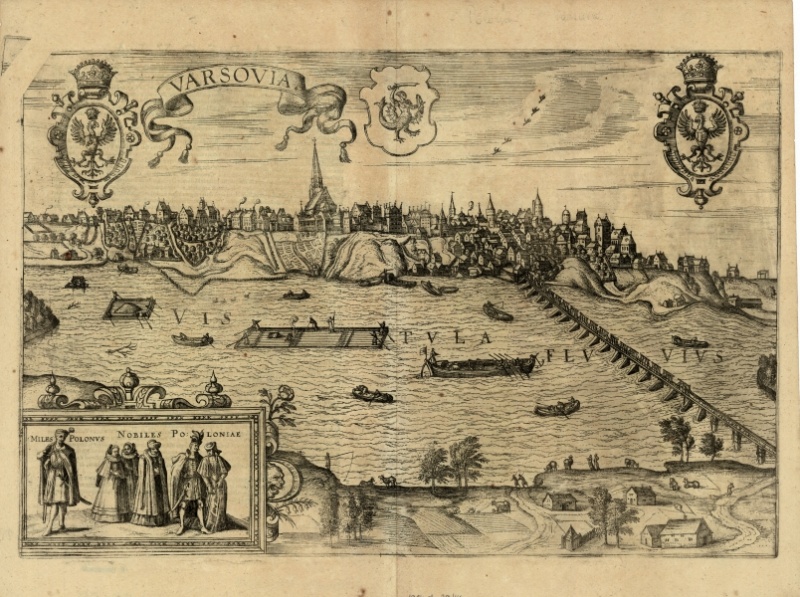 Befitting a travel book, in the form of a collection of daily records, the descriptions of the cities vary in terms of volume, depending on the length of stay and the number of "attractions". More attention was given to major cities such as Warsaw, Toruń, Gdańsk or Kraków. One can find rich descriptions of buildings and characteristics of the residents. Some local legends are also written down. During his journey, Csombor had the opportunity to witness several historical events, one of the most important of which was the Ordinary Sejm, which took place in Warsaw (26 April-7 June 1616).

In the introduction, Poles were said to be "self-assured and boastful, proud, impulsive, lewd, and yet very kind to each other, merciful to the poor and sincere defenders of their faith". Csombor described the most common greeting as "French" – entailing embracing each other. In terms of faith, he mentioned three main branches: Papal, Protestant and Arian.

During his journey to Gdańsk, Csombor observed and described not only the places he visited, but also the people living there and their customs. Among them, the attention of the traveller was drawn to the methods of sentencing to death in Grudziądz. One of them consisted in pinning the victim to a cross and then setting fire to the litterfall underneath, which was additionally doused with water to prolong the torment of the convict, who was suffocated by smoke. In turn, those sentenced to death by beheading were buried near the gallows, and an additional punishment was to impale their heads on stakes. 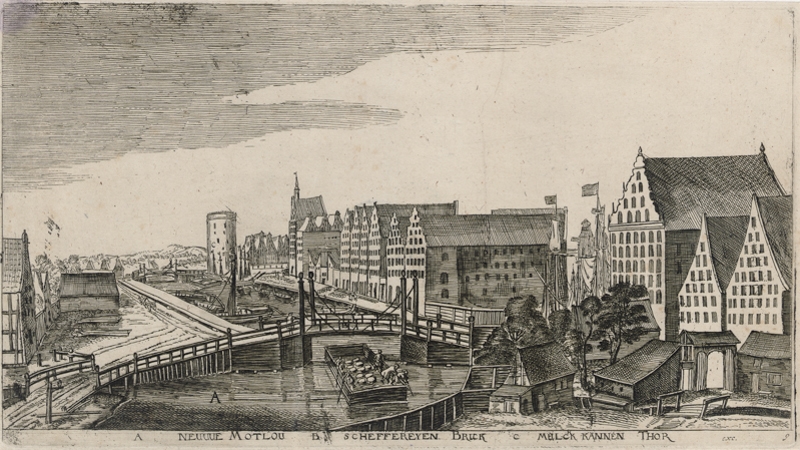 Granaries on the bank of Motława in Gdańsk, 1617.
A. Dickmann

Csombor observed the most customs among the residents of Gdańsk. This is not surprising given that he has spent most of his time abroad studying in this city. He wrote about them as follows: "every citizen of Gdańsk boasts of their wealth, is unfriendly to strangers, and everyone, except those in official positions, uses money and gifts to attain power". He also condemned the love of Gdańsk residents for music and art. The Hungarian traveller was particularly taken aback by Gdańsk's female inhabitants. According to Csombor's description, girls were "bolder than young men" in Gdańsk, which manifested itself in the fact that during a feast it was them who cut the food and served it to visitors. They also enjoyed more respect than men, because they did not greet anyone and kept their heads up no matter whom they met. On the other hand the lack of a man's nod to a woman was considered a huge insult. Women also married relatively late. Csombor mentions the age of 32 as a typical time of marriage, although he heard that weddings of forty and fifty-year-olds were also commonplace.

Silesians were also described briefly. According to Csombor, they were "gentle, calm, moderate and quiet, eager for great deeds". You could meet both those who dressed according German and Polish traditions.

It should be borne in mind that the opinions about the Poles we met were largely based on past, not always positive, experiences. They were also influenced by Csombor's worldview and the associated set of stereotypes.

Descriptions of cities and towns, especially their religious buildings, are interwoven with several local legends and myths. In the description of Prussia, the legend of killing girls in the southern part of the region called Galindia was mentioned. On the basis of literature research it was established that Csombor had to rely not only on oral accounts but also on the 14th century the Teutonic Knights Chronicle by Peter of Dusburg, which had not appeared in print during Csombor's trip. In practice this means that he had access to the manuscript. The effort made by the Hungarian scholar to comprehensively describe the regions he visited and to quote their founding myths should therefore be appreciated. 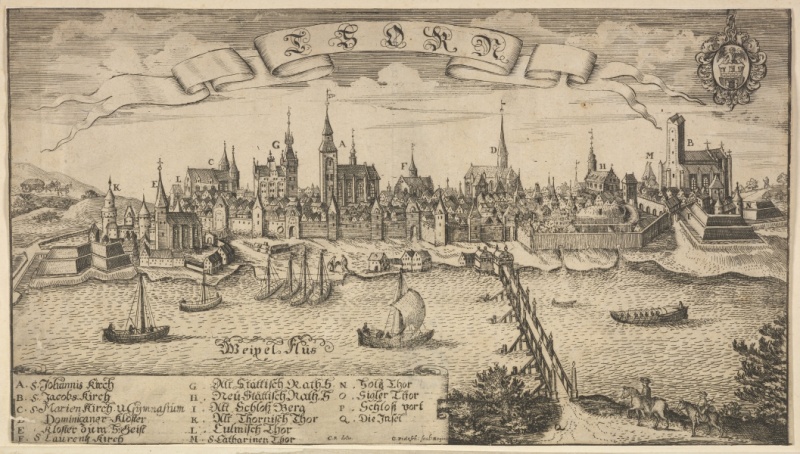 Another legend connected with the region is the one quoted by Csombor according Maciej Miechów's chronicle, where Prussias was the king of Bithynia, who allied with Hannibal in his attack on Rome. After the defeat, he had to flee to Ulmigeria and the land was named Prussia in his honour. Csombor describes the old beliefs there, mentioning deities such as Perkun, Paterimpo and Patello, which were venerated by priest Crue. Deities Wurshayto, Svaybartho and Gurrho were to take care of the animals.

Csombor devotes most space to legend of Gdańsk. Here, too, he refers to the chronicles, this time by Kasper Schütz. The origins of the town are mentioned, as well as the legend of the inhabitants of the village of Vich ruled by Hagel, who was killed by them for his atrocities. Other references to legends and myths are scarce. 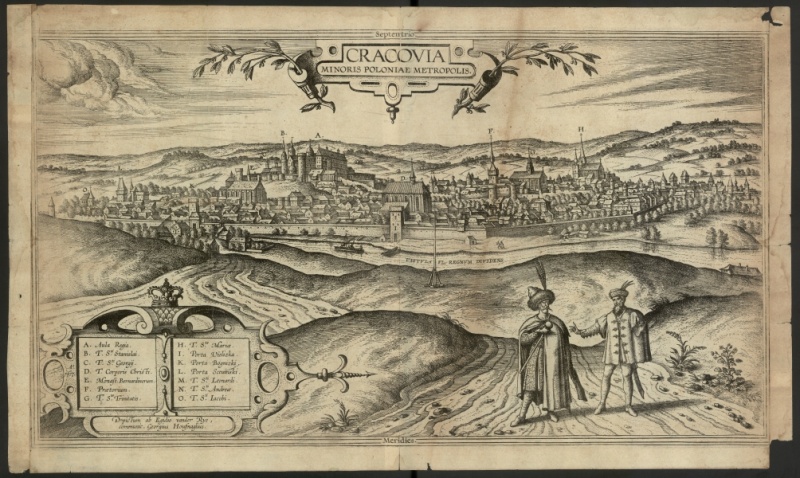 In his description of the Church of the Virgin Mary in Gdańsk, Csombor describes that the second organ located there was spoiled by the powers of hell. In turn according to pagan beliefs, the Champs Elysées were to be found in Lusatia. The legend of the Wawel Dragon is mentioned when describing Krakow.

RECEPTION OF CSOMBOR'S JOURNEY IN POLAND

Although "Europica varietas" was published in 1620, some of its fragments were first translated into Polish at the beginning of the 20th century by Adrian Diveky. In several issues of the monthly magazine "Ziemia" published in 1911, a series entitled "Z podróży Węgrów w Polsce" (From the journey of Hungarians in Poland) was published. It comprised of notes on individual Polish cities visited by Csombor, translated and collected by Diveky. It should be noted, however, that the mentioned places only concern the first stage of the journey leading to Gdańsk. Cities such as Kraków, visited on the way back home, were not included in this series.

Another translator and researcher of Csombor's peregrination was Tibor Csorba, who decided to follow in the footsteps of his Hungarian teacher in Poland. During his travels, he made watercolours documenting the contemporary state of the cities he visited. Observations on the journey around Mazowsze were published as a short article in Płock Notes in 1959. In his text, Csorba first quotes Csombor's observations characterising the inhabitants of some parts of 17th century Poland and the adjacent regions. In addition, he focuses on the towns in Mazowsze visited by Csombor, such as Warka, Warsaw, Zakroczym, Płock, Włocławek and Nieszawa. He added his own commentary to the accounts from the 17th century.

The first full translation of excerpts from "Europica Varietas" concerning Polish territory entitled "Marton Csombor. Journey around Poland" was published in 1961 and edited by Jan Ślaski. Parts concerning Gdańsk also appeared as a separate edition in 2013 under the title "Marton Csombor's journey to Gdańsk". Drawings by Aegidius Dickmann, which were made at the same time as Csombor stayed in the town add great value of this edition.

One of the most recent publications related to Csombora's journey is the 2016 "Polonica Varietas. In the footsteps of Marton Szepsi Csombor", the authors of which, after 400 years, travelled the Polish part of the route described by the pastor.