How do Hungarians perceive Poles and how do they feel about Poland and Poles?

We were primarily interested in the spontaneous perceptions of the adult Hungarian population about Poland. As for the country, most Hungarian citizens referred to the friendly relations between the Polish and Hungarians - 31.2 percent of the participants mentioned this in a spontaneous way. 15.1 percent recalled the beauties of the Polish landscape and images of certain cities, while 4.8 percent mentioned the country’s specific trade products, foodstuffs or the Polish market in general.

Regarding the most characteristic features of the Polish, the majority of the participants mentioned positive attributes (in the same spontaneous manner as with the other questions). In most cases, adult Hungarian citizens associated Polish people with friendly, kind and gregarious characteristics (mentioned by 31.8 percent), while 7.3 percent described them as religious, 3.9 as hospitable, 3.6 as hardworking and persistent. Only 2.8 percent of the respondents regarded them with negative attributes, which reflects the Hungarians’ particularly positive image of Polish people.

The survey found that males, students, people with higher educational level, affluent groups, people living in larger cities, and those who have visited Poland share a more positive view about the country than the average.

Social distance scale results show a similarly positive picture – a third of Hungarians would even welcome a Polish person in their own family (18.2 percent even as a spouse, 14.9 percent as a relative), 26.9 percent would be pleased to have a Polish as co-worker, which can be still regarded as close social relationship. 36.8 percent would willingly accept neighbourly relations. Only 2.8 percent of the respondents represent an explicit adverse attitude and say they would not share same residence with a Polish person be that a village, a town, a city or a country.

As far as demographic background variables are concerned, males, people between 18 and 29 years of age, students, highly qualified professionals, people belonging to higher social classes, people living in the capital, people without children and those who have already visited the country would accept a closer relationship -  these respondents show greater openness to Polish people.

Subsequently we analyized Hungarians’ opinion about Polish people based on the level of agreement with four statements. Most respondents (80.6 percent) agreed with the statement that economy in Poland is developing at a fast pace. Mainly the elderly, the pensioners, agreed with this statement at an above average rate.

According to three quarters of the respondents, Poland plays an important role in the European Union. This opinion is expressed mainly by the elderly, the pensioners, people in bad financial situation and those having children.

By the same token, Hungarians rather agree with the idea that Polish and Hungarian people have a lot in common (73.9 percent agrees or fully agrees). The elderly, the pensioners, people with medium educational level, people in moderate financial situation and those living in rural towns agree with the similarities at a larger than average rate.

In contrast, the statement that corruption is a prevalent phenomenon in Poland is received with disagreement, which seems to project a similarly positive image of the country. 30.6 percent of the adult Hungarian population agrees with the statement, whereas 36.9 percent does not. The fact that almost one third of them could not judge the situation reveals Hungarians’ lack of information about this issue.

We also asked respondents to give their opinion about three significant political figures. In all three cases, the highest percentage consisted of those who were not familiar with or did not have any opinion about the person in question, which suggests that Hungarians do not really follow political events in Poland. For Hungarians, the most sympathetic person from among the listed politicians was the former Polish prime minister, Jarosław Kaczyński, of whom 28.8 percent had a favourable opinion, furthermore, the rate of relevant opinions was also the highest in the case of this question with 36.7 percent of the respondents being capable of forming an opinion about him. A quarter of the respondents have a favourable opinion about president Andrzej Duda, 4.9 percent are unfavourable towards him, while 69.4 percent did not give their opinion about him. Current prime minister Mateusz Morawiecki is favoured by 23.2 percent of the Hungarians, whereas 3.1 percent thinks rather negatively about him. Interestingly, his name generated the least number of relevant responses, with only 26.3 percent being familiar with him, while 54.9 percent were unfamiliar with his name.

Relations between Hungary and Poland are considered friendly by 84.5 percent of the Hungarians, one in four people rated it as exceptionally friendly, 13.4 as neutral and 1.6 percent as unfriendly. The relations between the two countries were evaluated more positively than the average by males, people aged over 60, pensioners, highly qualified professionals, people in good financial situation, people living in the capital and those who have personal experiences about the country.

It was found that one third of the adult Hungarian population have visited Poland. This group consisted mainly of students, highly qualified professionals, people in good financial situation, people living in the capital and the residents of county seats. 91.8 percent of those who have visited the country travelled for tourism, 8.7 percent due to transit or transfer, 5.7 for business travels and 4.7 percent for their studies.

At last, we asked participants of the survey about the future of the relations between the two countries. According to 55.9 percent of the adult population, foreign policy relations between the two countries should be strengthened, 37.9 percent believes the current state of affairs is convenient, while 3.3 percent would favour the weakening of relations. A higher than average ratio of those in favour of expanding relations is constituted of males, people aged between 40-49, people with medium educational level, people living in good financial conditions, people without children and the respondents who have visited the country.

Please find below a few selected tables based on the received answers: 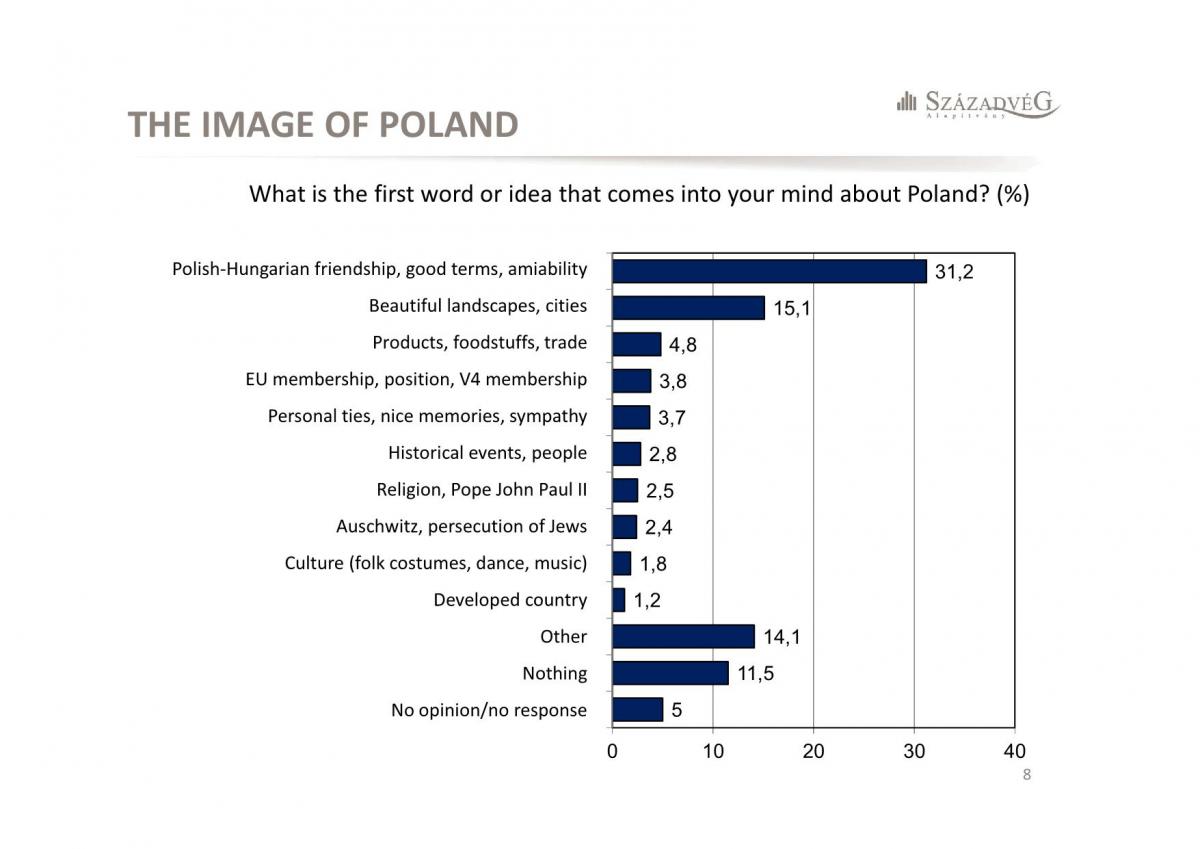 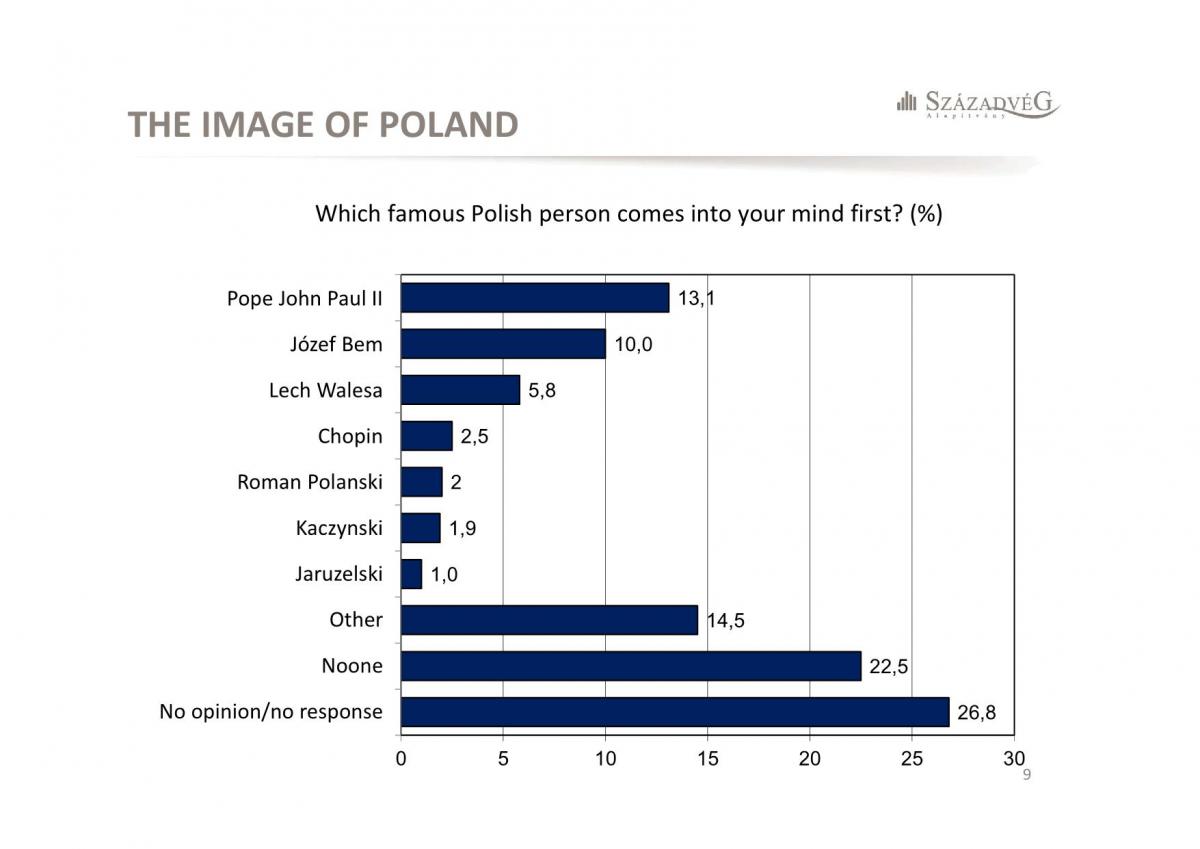 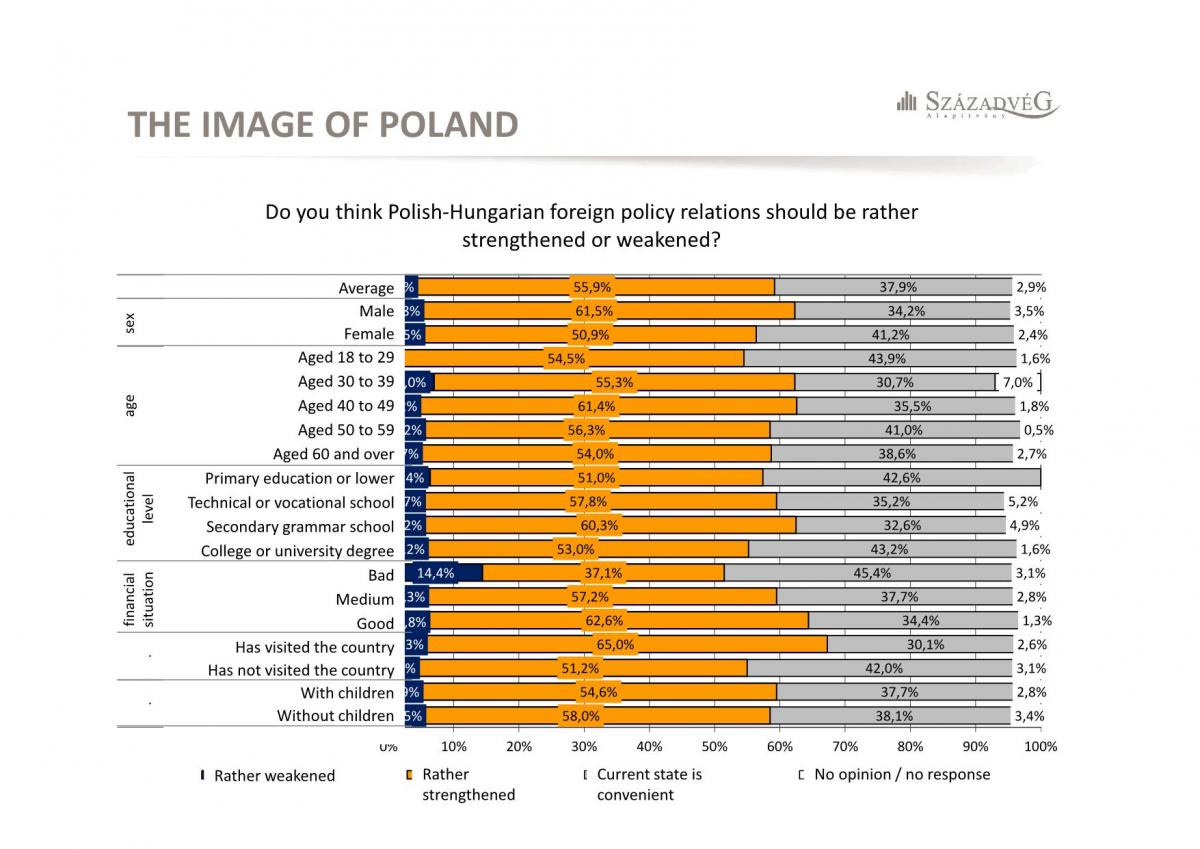 Between 1-13 November 2018, an opinion poll was conducted among Hungarian adult population by Századvég School of Politics Foundation, in which 1035 randomly selected adults were interviewed with CATI method*.  Due to sampling, the data published in the analysis may differ by maximum +/- 3.1 percentage points from the result which could have been produced by a nationwide survey on the Hungarian adult population. Sampling errors were corrected with the help of iterative proportional fitting (IPF)**. According to key socio-demographic factors (sex, age, educational level, place of living), the composition of the sample corresponds to the proportions of the adult Hungarian population.

*Computer Assisted Telephone Interviewing – Collection of data is carried out with the help of a software application through telephone, in which the interviewer records answers in the computer system immediately after receiving the participant’s response.

**The aim of iterative proportional fitting (or raking) is handling potential minimal differences between the sample distribution of demographic variables that ensure representativeness and the distributions observed in the population. Distinct weights are produced for and applied on each variable on a step-by-step basis. This circular process is repeated until the required population ratios are reached.

For more information please refer to the link below to download all Public Opinion Pull results: