Baranta is one of the most complex fighting schools in Europe. It was formed by the nomadic tribes of Magyars. It is based on both hand-to-hand and armed combat. Even though Baranta is mostly connected to Hungary, it borrows a number of elements from the cultures of other nations which wandering Magyars encountered along their journey (Scythians, Huns, Avars, Turks, Onogurs and Kazakhs). Baranta is Hungary's fastest growing t martial arts discipline. It is currently practiced by approximately three thousand people. More and more clubs are appearing, all age groups are welcome – from the youngest children to adults. Baranta's culture philosophy is "Every warrior lives, thinks, fights, dances and sings in Hungarian. Their most important task is to get to know as accurately as possible the culture that has developed the way of fighting that they are learning." 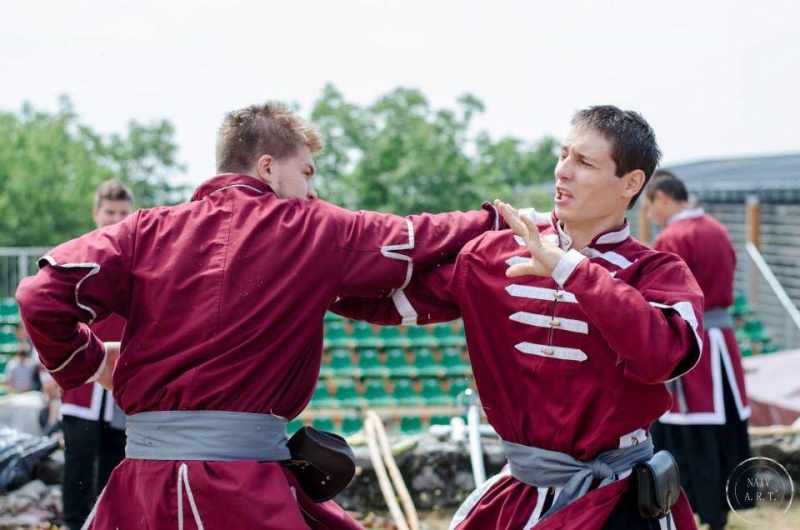 The first Baranta training methods were developed at least one thousand three hundred years ago. Initially it was primarily based on self-defence. Baranta's heyday came in the 16th century. However, the restrictions and prohibitions imposed by foreign rulers on wrestling, fist fighting, fencing, archery and horseback riding (including those imposed by the Habsburgs) meant that training methods had to be significantly modified. A part of the culture associated with the early martial arts techniques survived only in dances, traditions, books and artistic depictions. Gradually, the Hungarian martial arts culture began to adapt to Western traditions. However, in spite of this, the traditional art of combat survived on the outskirts of the country. Over time, attempts were made to reactivate it. During the two world wars, Hungarian officers collected the necessary knowledge in order to increase combat skills and attachment to national traditions among soldiers. Several elements of that research have survived to the present day. Attempts were continued in the 1960s. Much effort was put into developing a unified and homogenous martial arts system. However, Baranta could not compete with the then very popular oriental martial arts styles. It was not until the 1980s that work on developing the Baranta culture began to take shape. In 1993 its foundations were developed at the Lajos Kossuth Military University. The first Baranta Championships in Hungary took place in 1998. This is the only official competition of this sport and not only the Magyars but also competitors from abroad can take part. An important role in the development of this sport was played by study visits made by coaches and researchers to Mongolia and Kazakhstan, as well as visits of Mongolian and Turkish champions to Hungary, who extended the range of techniques used in Baranta by those used in Central Asia 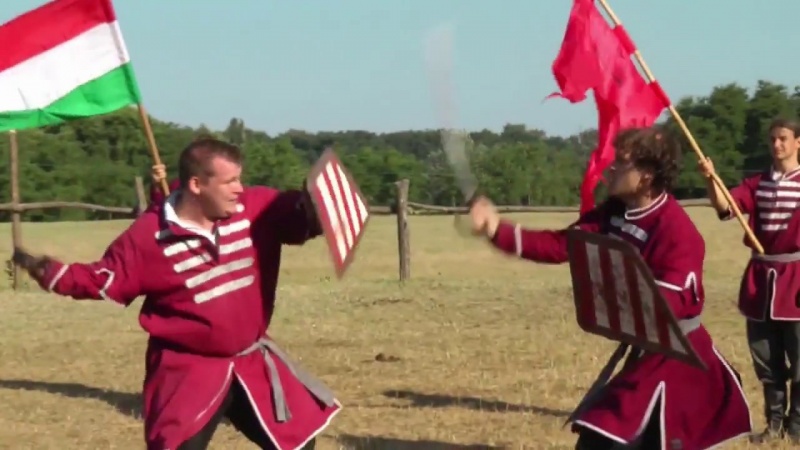 Originally the word ‘Baranta’ meant war games, plunder or resolving conflict in an aggressive manner but without bloodshed. In Hungarian on the other hand, it means preparation for combat or training in peacetime. Fighting techniques aimed at destroying the enemy can only be used by professional soldiers who have reached the highest rank of the warrior Aries. In 1999 the first test procedures were established, which had to be passed to obtain Baranta ranks. It was based on a system already used in ancient times. Fighters gain ranks that bear the names of animals formerly found in Hungary. Depending on their skills, they are given the rank of badger, wolf, panther or tiger. During the test, the level of the warrior's advancement in handling ranged weapons, weapons used in direct combat, and skills in unarmed combat are tested by means of grabs and punches. The best of the warriors can get the highest fifth rank to become a Baranta coach. Contestants are not classified into weight categories as in other martial arts. During a competition there is only an age division into three groups: women over thirteen, boys under seventeen and men over seventeen. These rules are modelled on those in force in ancient times. Practicing this martial arts is recommended for all those who are between four and eighty years old. It develops skills such as endurance, balance, concentration, strength, speed, dynamics and independent thinking.

Today Baranta is an independent style of martial arts, which aims to pass on to its adepts the achievements of several thousand years of Hungarian culture. It is based on a traditional Magyar approach to life and way of thinking. It also stresses the importance of social ties. The Baranta culture is rooted in Christian traditions. The official anthem of the associations centred around the movement is the "God bless Hungarians" song. During shows and performances the ballad "God of Hungarians" is often sung:

Our King St. Wladyslaw leads us on.

Our Lord Jesus Christ leads us on."

Zoltán Kodály, Hungarian composer, ethnographer and teacher, is the creator of the guiding idea of the members and supporters of Baranta: "Hungarian culture is an eternal battle between tradition (folk culture) and Western culture. Peace can only be achieved if the folk culture grows into a high culture, in accordance with its own laws".

According to Baranta, a man should follow traditional rules in his life, strive to get to know himself and adapt to the order of the world around him. The emphasis in the training is on comprehensive improvement of skills. In addition to handling ranged and white weapons, hand-to-hand combat and horse-riding are honed. During practice, ancient legends and secrets of weapons production are passed on. Archaeology, history and Hungarian war dances are also taught. Each Baranta warrior has not only the aim of getting to know the traditional Hungarian martial arts, but also has the duty to popularize Hungarian culture, nature and the country around the world. At the same time, the system promotes own initiative and creativity. It develops not only the body but also the mind. One of the main directions of promoting Baranta are territories inhabited by Hungarians outside Hungary: mainly Transylvania, Transcarpathia and Central Asia. Associations promoting it were established in Romania, Ukraine, Germany, Switzerland and the United States. 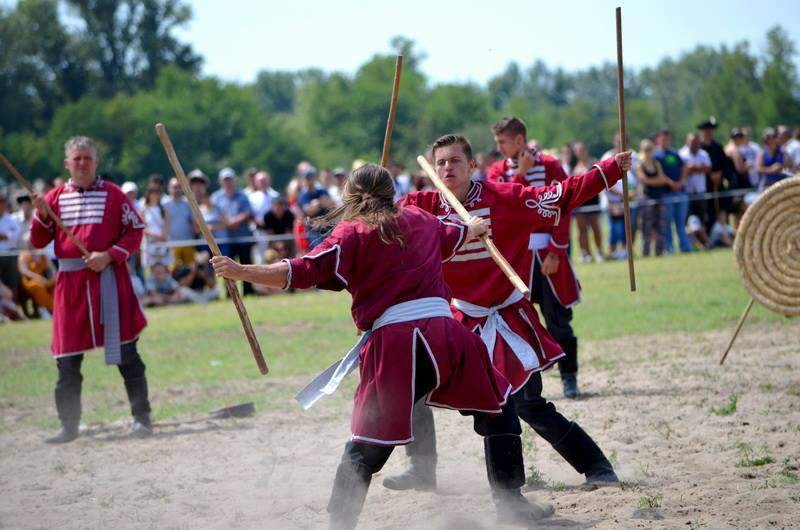 During preparations for competitions, traditional training methods are used which simulate realistic combat situations. Basic elements of training always involve an opponent. During an unarmed fight, a Baranta warrior tries to get close their opponent as quickly as possible and use his hands to immobilize them. During a white weapon fight, coaches pay special attention to tactical and logical analysis of the situation. During practice sessions and competitions, adepts train with a bow, sabre, sword, lance, spear, battle cross, sticks of different lengths, daggers, lassoes, shield and axe. Cooperation with horses is a very important element. According to Baranta rules, a horse should not be trained, but one should learn to live and cooperate with it. Shows and performances also play an important role in Baranta. These help associations and clubs celebrate traditional Hungarian martial arts several dozen times a year in Hungary and abroad.

In 2002 Baranta was added to the core national curriculum of Catholic secondary schools, and since 2004 it has been an optional subject at the Zrínyi Miklós National Defence University. The Sports Archery Association in Szentendre, and the Baranta section of the Honvéd Club in Budapest are its two main hubs in Hungary. Training associations are also active in Székesfehérvár, Felcsút, Cegléd, Miskolc, Karcag, Hódmezővásárhely, Dunaszerdahely and in the Csíki Basin. Competitors from Slovakia, Ukraine, Romania and Mongolia come the tournaments held in Hungary.

The most important goal set by people associated with Baranta is to popularise traditional Hungarian martial arts culture. This is to reinforce the Hungarian society, its strength and creativity. Through a networks of schools, Baranta aims to shape the young generation of Hungarians based on traditional values. Whereas outside the country Baranta is to help unify, support and strengthen the dispersed Hungarian community and to spread the Hungarian language, identity, way of thinking and traditional culture.