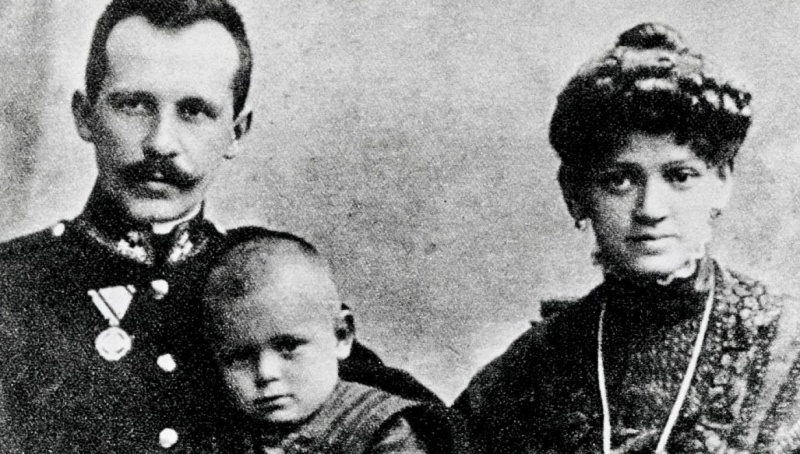 John Paul II almost wasn't born. These are the testimonies which confirm the heroic decision of Emilia and Karol Wojtyła to give birth to a child - the future pope, despite the threat to the mother's life and a suggestion to abort the baby.

On the hot 18th of May 1920, Emilia Wojtyła lay in her apartment in Wadowice on Kościelna Street. She was ready to go into labour. May devotions began in the nearby parish church when the clock struck five pm. During birth, Emilia could hear the Litany of Loreto. At that very moment her younger son Karol was born. The drama of motherhood While collecting materials for the book entitled "Emilia and Karol Wojtyła. Parents of St. John Paul II" I found an account of the events that led to the Wojtyłas' decision not agree to an abortion, despite the threat to the life of mother and child.

Maria Siwiec, a resident of Wadowice, remembered that when Emilia was in the second month of her pregnancy, she was given diagnosis from a well-known gynaecologist and obstetrician in Wadowice, Dr. Jan Moskała, that her pregnancy was in danger and that there was no chance of seeing it through nor giving birth to a healthy child. Dr. Moskała suggested an abortion. He also refused to oversee this pregnancy. This version of events was confirmed by Emilia's two friends from Wadowice, Maria Kaczorowa and Helena Szczepańska. In 1985 Roman Gajczak recorded a conversation with Maria Kaczorowa and published an account of it in the book "Closest to the heart. Sketches from the youth of Karol Wojtyła - John Paul II". Kaczorowa was already "seriously ill, bedridden, but her memory was simply phenomenal". She was, as the author pointed out, "probably the last living woman who knew the Holy Father's mother well". It is interesting that this published testimony of Kaczorowa has had a wider echo in Italy than Poland. It was soon used by the Italian author L. Bergonzoni when he wrote a monograph on "John Paul II's Mother".

They were also described by another Italian author, Renzo Allegri, in his book "The Pope's two »mothers«: Emilia Kaczorowska and Joanna Beretta Molla". He drew an analogy between the situation of Emilia Wojtyła and St. Joanna Beretta Molla. Both of these women, noted Allegri, were advised by doctors abort a child so that they could save themselves. Both "survived a great drama of motherhood. They had to choose between their own lives and the life of the child they carried within them". This version of the events is confirmed by Fr. protonotary apostolic Jakub Gil, a long-time parish priest in the Basilica of the Presentation of the Blessed Virgin Mary in Wadowice. - When I was walking around carol in 1998, an 86-year-old then resident of Wadowice told me that Mrs. Wojtyła was full of fear when it turned out that her pregnancy was in danger and when the doctor offered her to interrupt the life of her conceived child. She also stressed that it was her deep faith that prevented Emily from making the decision to have an abortion. Another resident of Wadowice, Jadwiga Tatarowa, who as a midwife took care of Emilia throughout her pregnancy, knew this well.

Michał Siwiec-Cielebon, a well-known Wadowice historian, heard her account. - From the account of Tatarowa, a midwife, it appeared that Emilia Wojtyła broke down when the doctor urged her to have an abortion. She was fully aware of the threat to her and her child's life, especially since the diagnosis was made by the most famous obstetrician in Wadowice at the time, Dr. Jan Moskała - says the historian.

Dr. Moskała had a reputation as a good doctor, he was considered a professional. But also, as Michał Siwiec-Cielebon claims, he was an abortionist known throughout Wadowice. - He used to go for walks with his two pointers and would talk to young girls, stating to them: "Don't laugh, you're sooner or later you'll come to me anyway!" He proclaimed that he was helping because he "it was his livelihood". He thought a conceived child was not a human. His surgery was in a building right next to the church. There was a sign on the front door: "Dr. Jan Moskała, gynaecologist, obstetrician, doctor of all medical sciences." On the wall of the building, every day someone would write in chalk: "Factory of angels". Every day Dr. Moskała's maid wiped the sign off, for it to reappear the next day. The Wojtyłas quickly decided to see the pregnancy through. So they started looking for another doctor. And since a doctor of all medical sciences, Samuel Taub, who saw patients within an army base had a good reputation, Karol Wojtyla senior turned to him for help (as a military officer he worked in the same unit). Dr. Taub confirmed that there is a risk of complications at birth, including Emily's death. However, he did not suggest an abortion. And agreed to oversee the pregnancy. He merely stipulated that he would take risks at the express request of both spouses and at their responsibility. - I have heard this account of the Wojtyła family's first visit to Dr. Taub many times in my family home, both from my grandmother and from Helena Szczepańska and Maria Kaczorowa, who talked to Emilia about this subject, being happy that there was a chance to give birth to this child," says Michał Siwiec-Cielebon. He also remembers that years later, when Karol Wojtyła was already a bishop and then a cardinal, Helena Szczepańska, who went to Cracow twice a year with a cake, said: "What if Emilia had an abortion? So lucky she gave birth to that baby then!". In this context, Tatarowa used to say to Maria Siwiec: "Look here, if it wasn't for that Taub, there wouldn't be Cardinal Wojtyla today!" Father Jakub Gil adds that when in the 90s of the last century he was walking on carols, an elderly lady, a native Wadowice woman, told him that when another doctor gave Emilia hope to have a baby, one could observe some extraordinary care for his wife. - As soon as he came from work, he stayed with her all the time. He was a refuge for her. The more scared she was, the more he was with her and supported her. It was clear that he loved her very much. And that meant a lot. It meant everything. Without a doubt, the strength and determination of her husband helped Mrs. Wojtyła to persevere and give birth to this child - emphasizes Fr. Gil.

All these facts are known only from oral accounts. No medical records have been preserved, no written sources. Can they therefore be regarded as credible? First of all, it should be noted that the two most important testimonies on this subject come from Helena Szczepańska and Maria Kaczorowa, who were friends with Emilia Wojtyłowa and who had this information from her first hand. Their reports are also consistent. Both women told Maria Siwiec the same version of events, as witnessed by Michał Siwiec-Cielebon and his mother Teresa Cielebon.

Moreover, it should be stressed that Helena Szczepańska was a respected teacher in Wadowice, who enjoyed universal authority. Her credibility is also pointed out by Fr. Józef Naumowicz from the Cardinal Stefan Wyszyński University in Warsaw, who, as a cleric in the eighties of the twentieth century, guided a group of French people around Wadowice and always took them to her. - Each time we visited Helena Szczepańska, who spoke fluent French and did not need an interpreter, and at the same time talked in an extremely interesting way about the life of the Wojtyła family. She knew a lot of details because she lived in the house next door. She had a very close relationship with Mrs. Wojtyła. She remembered how she took good care of little Karol and how happy she was when he was born. She emphasized that the future pope was not to be born and that his coming into the world was a real miracle, says Fr Józef Naumowicz. During his visit to Wadowice in 1979, John Paul II saw Helena Szczepanska in the crowd and asked for a meeting to be arranged with her, outside of the protocol and official pilgrimage plan. The same day he talked to her at the vicarage in Wadowice parish. The conviction of the older residents of Wadowice that Emilia and her child were ultimately saved by the Jewish doctor Samuel Taub is significant. I managed to find his grave at the Wadowice Jewish cemetery. There is an inscription in the tombstone, in Polish and Hebrew: „Dr Samuel Taub. MD. Born 1 XII 1869. Deceased 3 II 1933. Sacrificed his life to help the suffering humanity. This Jewish doctor also contributed to the fact that Emilia Wojtyłowa successfully gave birth to a healthy and strong son on 18 May 1920.

Milena KINDZIUK Assistant Professor at Cardinal Stefan Wyszyński University, author of books, including a biography of Emilia and Karol Wojtyła