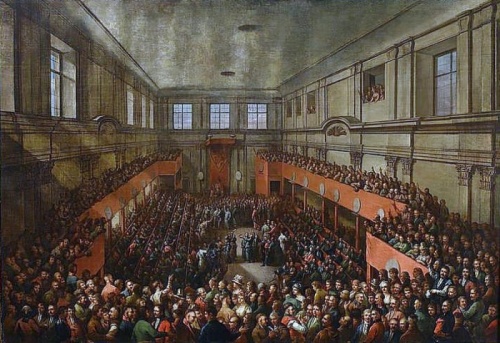 “Good change”, “the end of impossibilism”, “a break with TINA politics” (short for “there is no alternative”), “end of the plywood state”, “rejection of neocolonialism”, “getting up off our knees”, “objection to Multikulti ideology”, “return to Christian roots”. These are notions that for several years have frequented the front pages of newspapers and websites in various parts of the world. Used everywhere from Warsaw, Budapest, Prague and Bratislava to Bucharest, Sofia, Vienna and Rome, not to mention the other side of the Atlantic. They are not just buzzwords invented by journalists, niche authors or narrowly known social studies experts, but ideas that have entered real politics and real public debate. Discussions in which the most fundamental questions are raised about the future of Poland, Hungary, the Czech Republic, Slovakia, Austria, Italy and the whole of Europe.

What are the ideas that motivate the governing parties which, in more and more countries on the Old Continent, have been carried to power by a wave of discontent among a public affected by the great crisis of the first decades of the 21st century? Or rather a whole series of crises: from a crisis of values, through the financial and economic crisis, to the migration crisis? What do they intend to offer to nations overwhelmed by anxiety about terrorism and uncontrolled migration, the instability of national institutions, the unpredictability of the job market, and the progressively vanishing public sphere – replaced by a virtual world devoid of clear rules and reference points? What do they offer societies that are sensing first-hand the cutting of their own roots, beliefs and traditions, the diminishing presence of Christian culture, and the effects of an incomprehensible and sometimes aberrational aversion to the emphasising of identity and the sense of being linked to the history of one’s homeland?

The economist John Williamson, on the eve of the great changes of 1989, when presenting in Washington D.C. his famous “decalogue” for a new post-Cold-War order encompassing global economic and financial systems, could surely not foresee that in less than 30 years’ time the so-called Washington Consensus would come to be considered a damaging anachronism. Proposals for rapid privatisation no longer impress anyone, particularly in our part of Europe, where long-standing companies with original technical ideas, their own markets and established groups of customers have been sold virtually overnight into foreign hands and led to ruin. The consequences of the elimination of barriers to aggressive foreign capital have been experienced first-hand by small shopkeepers in Białystok, Katowice and Przemyśl, where family businesses have been bankrupted under the pressure exerted by large shopping malls – enjoying tax exemptions over many years, transferring their profits abroad, and offering their employees such “attractive” propositions as working on Sundays and public holidays.

The two-faced nature of competition and market deregulation has become known to ordinary media consumers, long fed with an identical narrative – irrespective of particular titles – sweet to the ears of large foreign publishing consortia. So-called tax reforms, focused on the lowering of rates and the creation of an opaque system in which VAT fraud has become a normal part of operations for many firms and entire industries, continue to leave their mark on national budgets. Cuts in public spending and welfare, allegedly intended to lead to a more effective and efficient state, have excluded from it thousands of weaker individuals, less able to cope in the dynamic modern reality, finally completely undermining their trust that the modern state, apart from making demands, is also in a position to offer them something. Guarantees of rights of ownership have fast transformed into a caricature, enabling castes of lawyers, acting without any controls, to appoint administrators – in place of ageing but still living owners – for tenement houses bought up en masse by debt buyers in Warsaw. Increased flexibility in employment law and terms of employment has led to a huge number of no-rights contracts and the lack of pension prospects for the younger generation. The commercialisation of public services, including education, health care and transport, has not proved a miracle cure for society’s problems. It has not made people healthier, and levels of knowledge about the world have not greatly improved over the last few decades. Paradoxically, privatisation has even set many areas of life backward. A prime example of this is the cutting of transport links between small towns and metropolises, leading to the cultural and civic exclusion of people in many districts and counties throughout Poland.

Francis Fukuyama got it disastrously wrong in his 1992 book “The End of History and the Last Man”. Liberal democracy treated as an unquestionable, dogmatised religion, whose source and summit are the integration of existing national states, free trade, the fight against economic protectionism, and globalisation, which lifts all boats like a rising tide, has in Poland – like in Hungary and many other countries that cast off the yoke of communism in 1989 – turned out not to work like a fairytale magic spell.

People in Poland are less and less attracted to the idea of transferring funds and investment only to large metropolises, or the creation of extensive strategies for the development by “polarisation and diffusion” of communities and countries. These ideas have failed to improve the lives of millions of ordinary people, and – through their artificiality, pomp and poorly understood elitism – have demonstrated that the policies and visions of development can and must be different. Taking account of demographic trends and social stratification, the differences between cultures and the rules of community life, diverse models for the creation and functioning of institutions, spiritual traditions, and – last but not least – citizens’ aspirations. As is the case today in many other countries, in Poland there are increasingly visible cracks between the elites created after 1989 – often with communist roots, satisfied and functioning excellently in the complex, network structure of modern Europe – and ordinary citizens.