Skip to main content
Back to top
Was Dracula a Hungarian? 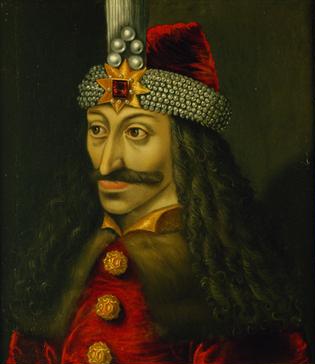 Who was Vlad III the Impaler, known as Dracula? An eccentric aristocrat, sleeping in a coffin during the day and drinking blood, a Wallachian prince brutally exterminating his enemies, or maybe a Romanian national hero? What was his relationship with Transylvania?

The public imagination is shaped by mass culture – mostly books and films. Thanks to these two media, people all over the world have heard about Count Dracula, an undead vampire who has been terrorising the mysterious Transylvania for hundreds of years. The popularity of films with the Transylvanian vampire in the starring role has completely overshadowed its historical prototype in our collective consciousness.

A vampire is a fantastical creature of the folklore of the Slavic and Balkan nations. Ethnographic research proves a strong belief in vampires (ghouls, ghosts), i.e. the bodies of the dead that rise from their graves to feed on human blood. Vampire burials, where the body of a deceased person suspected of vampirism was pinned with a stake or decapitated, continued to take place in the Carpathian Mountains as late as the 20th century. This folk vampire did not resemble the image of the bloodsucking creature popularised by the contemporary cinema industry. It was much closer to another imaginary monster – a zombie. Folkloric vampires are simply bodies of the dead, which do not decay but rise from their graves in search of human blood. Most often, they are senseless creatures guided by the most primitive instinct to prey on the living. In some vampire legends, however, the vampire – after rising up from the grave – is drawn to the area where it once used to live. This creature likes to visit its old house and harass its relatives.

Folklore includes many detailed descriptions of the weaknesses and characteristics of vampires. Almost always, the act of rising up from the grave and the activity of the undead creature is linked to night-time hours. In some cases, the lore states that a vampire rises during a full moon, and some sources say that this happens during a new moon. Not every vampire bite was fatal, sometimes the symptoms of anaemia and malnutrition in the living were explained by the night-time visitations of these supernatural beings.

The vampires were supposed to be deterred by the smell of garlic, scattered poppy seeds, a magic circle outlined in chalk on the ground and religious symbols such as the cross, holy images and holy water. Even at the start of the 20th century, the belief in vampires and cases of antivampire practices were noted amongst the poor inhabitants of the Polish regions of Podkarpacie, Podolia, Pokkutya and the Balkan nations. According to folk beliefs, the vampire most often harassed members of its local community, focusing on its own family. Consequently, fresh graves were dug up quite frequently – if the corpse was not in a state of advanced decomposition, this was considered as evidence of vampiric activity, which lead to various macabre rituals. The head was decapitated, the body was pinned down with a wooden stake or a harrow tooth, and poppy seeds were scattered into the grave.

The ennoblement of vampires happened during the Romantic period, during which the mindless and bloodthirsty corpses transformed into true nobility among imaginary monsters. One of the first writers to transform vampires into genteel creatures was Goethe – in The Bride of Corinth, he made the beloved of the main character a vampiress. He was then followed by others. Vampires became a subject of the writings of Byron and Polidori as well as of Mickiewicz and Słowacki – the Polish Romantics.

At the end of the 19th century, the Irish writer Bram Stoker published the novel Dracula, which permanently shaped the image of vampires in mass culture. The main character of the book, the anti-hero of sorts, was Count Dracula – a vampire Count of Transylvania.

What do we know about him? In fact, the literary Dracula was based on two Wallachian hospodars – Vlad II Dracul and his son, Vlad III Dracula, also known as Vlad the Impaler. Their biographies merged into one, becoming a symbolic point of reference for Bram Stoker. Vlad II, who came from the Basarab dynasty, was a pretender to the throne of the principality of Wallachia. This Balkan principality formed a part of a complicated political puzzle in south-eastern Europe, which was the meeting point of the opposing interests of the Habsburgs, the Kingdom of Hungary, Turkey, Venice and even Poland (Vlad II supported the expedition of Władysław III of Poland in 1444). Vlad II was the protégé of the Hungarian rulers and spent his youth at the court in Buda, where he was made a member of the Order of the Dragon – an elite society made up of nobility called to defend Christianity against the Turks. Vlad took his name from the Order of the Dragon – Societas Draconistarum. After losing the Wallachian throne, Vlad departed for Hungary, where he was given the title of the Voivode of Transylvania. It was here, in the Transylvanian German town of Schäßburg (today Romanian Sighișoara) where his son Vlad III, later called Dracula, or son of the dragon, was born in 1431. Another name for Vlad III was Țepeș, i.e. “the Impaler”.

Vlad III spent some of his youth as a hostage of the Ottoman Empire. His father was murdered by the boyar opposition but thanks to Moldavian support, Vlad III was able to return to the Wallachian throne. One of his first decisions was the imprisonment and execution of the double-crossing boyars. This was when Vlad III first used impalement as an execution method, which later became his trademark. As the times were challenging, he was forced to continuously travel between Turkey and Hungary, putting out manifestations of internal opposition and attempts by other Balkan states to interfere in the matters of his principality. He supported Wallachian merchants, which angered the German burghers from Transylvania; he also invaded and plundered Brașov. Vlad III used to spend most of his time in his Poienari Castle, located in the inaccessible Făgăraș mountains. He survived a Turkish invasion, lost his throne twice, and finally died in an ambush prepared by the Turks. Compared to other rulers of his time, he was not particularly cruel. The harrowing legend of Dracula was largely created by Transylvanian merchants who, even while he was still alive, distributed pamphlets showing the Wallachian Voivode as a cruel ruler, who boils his victims alive, impales them and even drinks human blood. However, no one, neither during Vlad III’s lifetime nor after his death, depicted him as an undead bloodsucker who rises from the grave.

It was not until the end of the 19th century that Bram Stoker decided to combine three elements together: the vampire theme, which was popular in Gothic literature of that time, the cruel Balkan ruler and the mysterious, wild Transylvania. The Dracula portrayed in literature is not the same as its historical representative. First of all, we learn from his conversation with Jonathan Harker that he is not a Wallachian, but a Szekler, therefore he is Hungarian. He resides in a mysterious castle on the Borgo Pass in the Carpathians, on the road leading from northern Transylvania to Moldova (in fact there is no castle on the Borgo Pass). The literary Dracula mentions the legend where the Hungarians are descended from the Huns and makes it clear that he himself is descended from Attila, the ruler of the Huns. Interestingly, in the 19th century, on the Transylvanian side of the Carpathians near Borgo lived a small group of people belonging to Szekler nobility and claiming to be descendants of Vlad III.

The character created by Bram Stoker became a firm part of the literary, and then later, cinematic canon. An eccentric aristocrat who lives in a Gothic castle in the inaccessible Transylvania, shrouded in mystery. Speaks Latin with great ease, just like Old Hungarian, German, and Romanian. Dresses with sophisticated elegance, and wears a black cape lined with scarlet as his hallmark. During the day, Count Dracula sleeps a lot (in the castle crypt), but at night he has plenty of energy. His extensive library collection contains many unique books, although they are covered by dust and cobwebs, similarly to all furnishings in the castle. Dracula likes to reminisce the past glory of his family, evidenced by numerous coats of arms, suits of armour and portraits of his ancestors. He shows great interest in young, beautiful women. He abhors silver, the smell of garlic and holy water, and generally any items which might remind him of the godly world order, such as the cross.

Animals which serve him are traditionally associated with night, darkness and hunting – wolves, bats, and rats. Mortals are also in his service, although it is difficult to consider them “ordinary” because of their gloomy disposition and tendency to engage in dark worship of their master. The Count has the power to make new vampires – these are usually women, his lovers, weaker than Dracula and subordinate to his will.

The incredible success of Stoker’s novel marked the beginning of the fashion for vampires that continues to this day. The story written by the Irish writer has repeatedly served as the basis for film, and numerous actors did their very best to portray the Wallachian ruler. He was called Nosferatu, Count Orlok, and its life story has links to the Hungarian aristocrat Countess Elizabeth Báthory.

When travelling through southern and central Europe today, we can find numerous locations associated with Dracula – both the historical and literary one. For instance, the beautifully preserved old town in Sighișoara, with a town house on the market square where Vlad III was born. There are also castles associated with the figure of the Transylvanian prince – Poienari and Bran. There is the Borgo Pass, which is much more gentle than the one shown in the films, but remains an interesting place in northern Transylvania all the same.

All in all, it is certainly worthwhile to travel across the nations of Central Europe, as their authentic history is often more incredible than the literary fiction created by Bram Stoker.