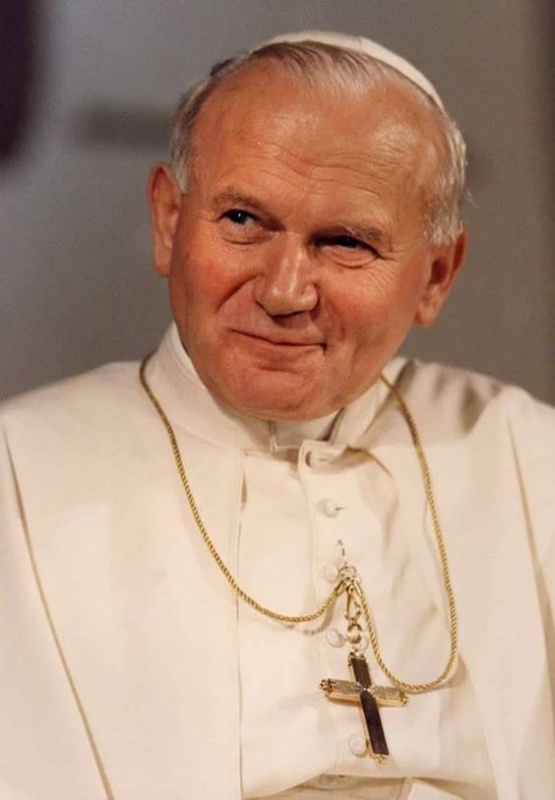 On May 18th this year we will celebrate the 100th anniversary of the birth of Karol Wojtyła - Pope John Paul II. One day later, on 19 May, it will be a year since the solemn entry of the relics of the Saint to St. Stephen's Basilica in Budapest.

Karol Wojtyła was born on 18 May 1920 in Wadowice, a town near Kraków. He was also baptized there at the Basilica Minor of the Sacrifice of the Blessed Virgin Mary on June 20, 1920 by Father Franciszek Żak, a military chaplain. His parents chose the name Karol to honour the last Austrian emperor, Charles Habsburg. He received his First Communion on May 25, 1929 and the Sacrament of Confirmation was given to him by the Metropolitan Archbishop of Kraków, Adam Stefan Sapieha on May 3, 1938. His faith was strong, he served as an altar boy in the parish church. At the all-boys high school in Wadowice, one of Karol Wojtyła's teachers and his tutor was Mirosław Moroz, Master of Philosophy at the Jagiellonian University and a lieutenant of the Polish Army reserve, later murdered in Katyń in 1940. In October 1938, young Karol began studying at the same faculty. After the outbreak of war and the closure of the university by the German occupants, the young student was employed as a worker in the Kraków chemical factory "Solvay" quarry. He became involved with the underground Federation of National-Catholic Organisations "Union" and with the Labour Party. Karol's views formed there and later took the form of social teaching of John Paul II. He also performed in clandestine theatres. Above all, however, the vocation to the clerical state was maturing within him. In 1942, he began secret studies in a clerical and theological seminar at the Jagiellonian University. On November 1, 1946, Cardinal Adam Sapieha ordained Karol Wojtyła as a priest in the chapel of the Kraków Archbishops' Palace. He then studied theology in Rome, at the Angelicum Pontifical University.

After defending his doctorate and returning to Poland, he was a curate in Niegowić in Małopolska and St. Florian's parish in Kraków, focusing on activities with young people. He continued his scientific work at the Metropolitan Seminary in Kraków, at the Jagiellonian University and the Catholic University of Lublin, obtaining a post-doctoral degree. On 28 September 1958, at the age of 38, he became the youngest Polish bishop. Four years later, he became the national pastor of creative circles and intelligentsia. Knowing several languages, he was exceptionally active in the work of the Second Vatican Council (1962 - 1965) and, on the national level, participated in the preparations for the Baptism of Poland's Millennium. This resulted in his appointment as Archbishop of Krakow in late 1963. On 26 June 1967, Pope Paul VI appointed Archbishop Wojtyla a cardinal. Karol Wojtyła prepared the next theological congresses - national and international. He made scientific and cardinal journeys to the United States, Canada, Australia and the Federal Republic of Germany. He was a member of the Synod of Bishops and three Congregations of the Vatican Curia. He led the Polish church together with Primate Stefan Wyszynski, despite the attempts of the Security Service to conflict them. The conclave held on October 16, 1978 named Karol Wojtyla as the new Pope, who took the name John Paul II.

The Polish pontificate lasted 26 years and 5 months (the third longest in the history of the papacy). John Paul II made an important contribution to the overthrow of the communist system in Central Europe and brought the Church into the new millennium. He made 104 foreign pilgrimages (including 8 to his homeland) and 146 in Italy, defending peace, family rights, unborn, elderly and needy children, meeting with followers of many faiths and religions. He initiated World Youth Day, announced the new Code of Canon Law and the Catechism of the Catholic Church, entrusted the whole world to the Mother of God and to Divine Mercy. In 1981 there was an assassination attempt on John Paul II. The Pope miraculously avoided death by the bullet of the killer from Turkey, Ali Agcy. His life is set as a model for a Christian attitude towards the world and others. He died on 2 April 2005 at 21:37. The funeral ceremony at St. Peter's Square on April 8th was attended by 300 thousand people. The coffin with the body rests in the basement of St. Peter's Vatican Basilica. The beatification of John Paul II was performed on May 1, 2011 by his successor, Benedict XVI. 3 years later, on Divine Mercy Sunday, April 27, 2014, the canonization took place, thanks to another Pope, Francis.

John Paul II beatified five of our brothers during his pontificate. These were: Vilmos Apor (w 1997 r.), Tódor Romzsa (2001), László Battyhány-Strattmann and Márk Aviánói (2003) as well as King Charles IV (2004). In 1989 he canonized Agnieszka Czeska (cousin of King Andrew II of Hungary), in 1995 the Holy Košice Martyrs, in 1997, Jadwiga Queen of Poland, daughter of Louis I of Hungary, in 1999 St. Kinga, patron of the Kingdom of Poland and Lithuania, daughter of Béla IV of Hungary.

On 19 May 2019, in the largest church in Hungary - St. Stephen's Basilica in Budapest, a solemn procession introducing the relic of St. John Paul II, brought by Archbishop Mieczysław Mokrzycki, Metropolitan of Lviv and Papal Secretary in 1996-2000, took place. The ceremonial mass was attended by the Ambassador of the Republic of Poland to Hungary Prof. Jerzy Snopek and his wife, the President of the National Polish Government in Hungary Zsolt Bátori and his wife, and a large number of Polish immigrants and Hungarian faithful. During the service, the relic of the first degree in the form of hair of Karol Wojtyla was standing on the altar, later it was moved to the chapel of Our Lady of Czestochowa. After the mass, Archbishop Mokrzycki met with representatives of the Polish community in Budapest. Among them was Dr. Halina Csúcs Lászlóné - co-initiator of bringing the relics of St. John Paul II to the Basilica.

I have always respected and loved the Holy Father John Paul II. He was a truly magnificent pope. I had a chance to meet him when he was still a bishop. He made such an impression on me that I became a life-long admirer of his Since he was canonized, I really desired to get some of his relics for the basilica," said the auxiliary bishop of the Archdiocese of Esztergom–Budapest and the pastor of St. Stephen's Basilica, György Snell, after mass.

A copy of the Black Madonna painting was given by the Jasna Góra Pauline Fathers to the participants of the first National Pilgrimage of Hungarians to Poland on 28 June 2011, led by László Kövér, President of the Hungarian Parliament. On their return to Budapest, the pilgrims placed the painting in the chapel of the Icon of Our Lady of Czestochowa in St. Stephen's Basilica. On 30 June 2017, the painting was crowned by the Primate of Hungary, Cardinal Péter Erdő, in the presence of a large gathering of churchgoers. The crown - made in Poland and consecrated in Częstochowa - includes the coats of arms of Poland and Hungary as well as the figures of Saint Stephen, who entrusted Hungary to Mary and St. John Paul II.

Attila Szalai, a Hungarian friend of Poles, winner of the "Witness to History" prize awarded by the Institute of National Remembrance in 2019, recalled the meeting with John Paul II on 16 June 1999, which took place on the occasion of the canonization of St. Kinga in Stary Sącz: The Pope called me to him to rehearse a text he wanted to say in Hungarian. He read a phonetically written Hungarian text, and I corrected its pronunciation. It took about 20 minutes. Finally, he thanked me for my help in Hungarian and blessed me. The Holy Father saw the state I was in, smiled again - and this time there was no denying it - mischievously and said: "Oh, good Sir, why are you so worried? The Pope is only human too."

The author is a historian and publicist, an employee of the Institute of National Remembrance.