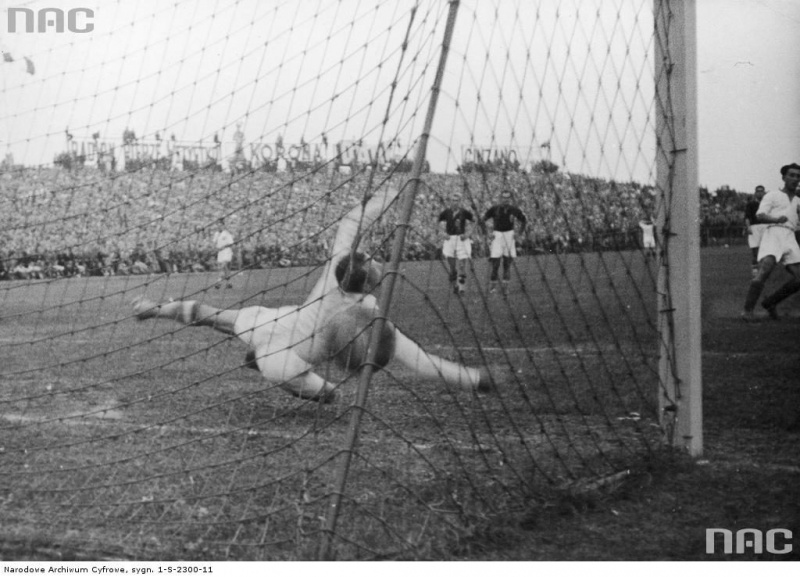 On the last Sunday in August 1939, Poland and Hungary, two participants of the 1938 World Cup in France, played a friendly football match at Warsaw's Polish Army Stadium. It soon turned out that this was to be Poland's last game before the outbreak of World War II.

The score at the end of the game was 4:2, an unexpected Polish victory over the 1938 World Cup finalists, even though at one point the Brothers were leading 0:2! Ernest Wilimowski put the ball in the net three times for Poland.

Perhaps if Stefan Wiechecki – Warsaw's Plautus was at the match, his commentary would have gone something along these lines:

The crowd at the Polish Army Stadium wavers, screams, whistles and claps. It will quickly pick out a good pass and praise it and each mistake will get ... and here I will refrain from quoting, on account of those still at school.

Our brothers are putting remorseless pressure on us...

And just then a Hungarian player puts the ball in our goal for the second time....

I'm sitting in a daze, looking at the pitch, then at a "Radion" washing powder ad – the one which gets everything off... "Yeah, Radion washes everything and we are taken to the cleaners by everybody" is my bitter thought. I'm sitting like on a bed of nails fuming at Andrzejeszczak for bringing me here... Notwithstanding that my Fat and Wide turned her nose up high when I announced that I'll be going to the Hungary game with me mates and I will surely get "I told you so!" in the evening.... No matter, I'll cope, still a lot of time left until the evening. Perhaps something will change.

A deep sigh... and suddenly a scream "Yeahhh!". I turn my head and can't believe my eyes. The guest's gaolie is picking the out ball from his net. My mood picks up somewhat.

During the break I witness Andrzejeszczak making a bet with his neighbour.

What is it about? Simple, who will score and how many times. Of course Andrzejszczak is betting that we will win and send "2 or 3 screamers" into the opposing net, and his neighbour, Felutkoszczak from Muranów says the opposite. There's no denying that they are the "dog's bollox of football". A cow and calf (or more) in some bar was at stake. The winner chooses the venue.

- "Seal the bet" Andrzejeszczak said to me.

As the witness, I was automatically considered to be part of the planned consumption.

Everyone "privy to history" knows what happened over the ensuing 45 minutes , and that we "where no bums and scored three goals against our chums" - as Andrzejeszczak cheerfully summed up the game.

The evening only got better.... Even my Goddess was placated when I came home in the evening, or perhaps the early hours.

No one was thinking about the war engulfing us. Bars were full to the brim. Good mood, enhanced by you know what, was on the menu. Even though our newfound friend was foretelling war as "the entire Warsaw is on the binge. That is a sign that war is imminent", but we reminded him how accurately he predicted the result of the game.

However, in true Warsaw style we turned the subject of war into jokes: "Did you hear? Gdansk is full of people in mourning... and in the evening." And one seriously elephant's trunk patron summed up the issue of German territorial claims to Pomerania thus: "Is it Baltic those scoundrels are after? They shall not get even a single bucket of water!"

No one knew that in less than a week out world will be turned upside down...

During a post-match banquet at the Foreign Office Ministry Official's Club, the Polish Football Association President, colonel Kazimierz Glabisz said: "Polish football has entered a new era with the game against Hungary. Who knows if today's game isn't the last before the war."

Unfortunately he was right.