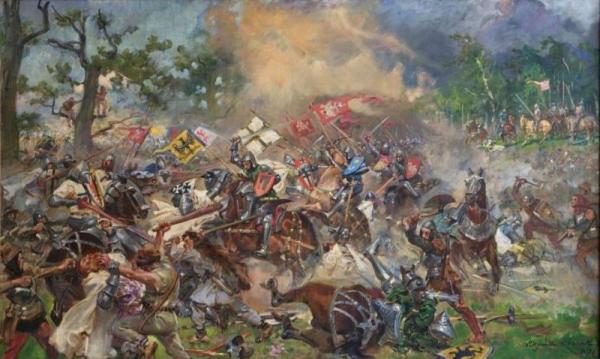 On the 15th of July, the fields of Grunwald witnessed a clash between the armies of the Polish king Władysław Jagiełło and of the Order of Brothers of the German House of Saint Mary in Jerusalem, colloquially known as the Teutonic Order. Zawisza from Grabów, Sulima coat of arms, known as Czarny (Black), was amongst the most chivalrous Polish knights who contributed to the victory on that day.

"Not only in that battle, where taken captive he died, but in all campaigns he proved himself to be a bold and outstanding knight, renowned for his courage and grand deeds which none could equal. His words were sweet and endearing, in so much that not only those respectable and noble but also barbarians were ensnared by his kindness. But most importantly he had a rare quality to show the bravest fighting zeal in battle and yet the most restrained prudence in counsel. For his brave deeds he is worthy not of my meagre praises but of those of Homer himself."

The late Middle Ages was a time when knighthood slowly ceased to count as a major military force capable of tipping the scales in battles. The importance of heavy troops, consisting of well-trained soldiers of various states, fighting for money and with increasingly more effective weapons, capable of stopping a charge of heavy mounted knights, was gaining in importance. At the same time, the culture of celebrating great deeds of legendary knights developed intensively. In Poland, in the second half of the 14th century, the nobility used names such as Tristan, Peregryn, and Siegfried. This shows the popularity of knights’ tales celebrating the adventures of the companions of King Arthur, Charlemagne and other legendary knightly heroes. Many representatives of the nobility tried to imitate legendary figures, not only in battle but also in everyday life.

The Polish knight who came closest to the ideals sung in the legends was Zawisza of Sulima coat of arms from Grabów, called Czarny. He was born around 1370 in Małopolska. We do not know much about his early years, but the later successes in diplomacy would indicate that he would need to have some degree in literacy and Latin. Like any noblemen of his time, from the age of seven he was trained in "seven noble knightly arts", which included, among other things, horseback riding, use of weapons, wrestling and fist fighting. Subsequent records claim that he achieved unprecedented proficiency in combat, both through innate abilities and conscientious training. We do not know exactly who his teacher was, although some researchers of old European martial arts associate the name Zawisza with the figure of Virgil of Krakow, a master of fencing who continued the tradition of the German Johannes Lichtenauer school. Regardless of how it really was, Zawisza became famous during his life as an invincible tournament knight.

It was a difficult time for Europe. No one thought about taking Jerusalem from Muslims anymore, Turkish troops were present in Europe and were acting ever more boldly in the Balkans. They were opposed by Sigismund of Luxembourg, king of Hungary. Knights from various parts of Europe, including Poles, assembled under his banners. The most distinguished Pole in the service of the Hungarian king was Scibor of Ściborzyce, Ostoja coat of arms, who for his faithful service was awarded, among others, the title of the governor of Transylvania and given a huge estate. Zawisza also fought in the service of Sigismund. However, did not forget that he is a Polish knight. Following the news of the outbreak of war between the Order and the Kingdom of Poland in 1409, he left the Hungarian service and appeared under the banner of the Kraków, among the noble knights. The decision was probably connected with an internal conflict, because Sigismund of Luxemburg, bound by an alliance with the Teutonic Knights, declared war on Poland. However, the Hungarian military action was extremely sluggish, more to convince the Teutonic Knights that Sigismund was fulfilling his alliance than to inflict real damage upon Poland.

On July 15, 1410, the great battle of Grunwald took place, in which the army of the Order was destroyed. Zawisza fought as one of the greatest heroes of the conflict, he probably saved the Kraków flag dropped by Marcin from Wrocimowice, Półkozic coat of arms.

After the end of the war with the Order, Zawisza travelled extensively across Europe, taking part in numerous (always victorious) tournaments, including Buda in 1412. He carried out diplomatic missions for the Polish king and served again the Hungarian ruler, Sigismund of Luxemburg.

In the service of the latter he finally died in 1428 during a retreat from the Golubac fortress.

He is remembered primarily by Poles, but also by the peoples of Europe, as a knight closest to ideals, a good warrior, a noble, truthful and merciful man. To this day in Poland, and not only among scouts, there is a saying that one can rely on someone “like on Zawisza”.