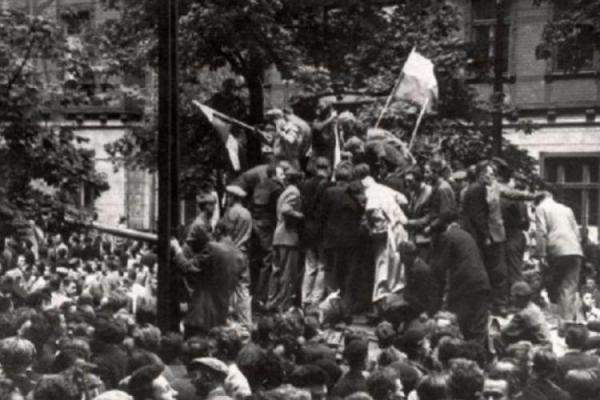 The year of 1956 was a year of enormous changes and upheavals across the entire Eastern Bloc. Turbulent events also took place in Poland, and were initiated by workers from Poznań demanding better working conditions in June that year.

The years 1944–1953 were undoubtedly the most austere times for the citizens of the states that found themselves in the Soviet sphere of influence. In line with the Stalinist principle which stated that the “class struggle intensified along with the development of socialism”, there was a constant escalation of repressions against conquered nations. The subordination of citizens during this period was of a truly radical nature, with thousands of victims, prisons, labour camps, ubiquitous censorship and surveillance. Although Poles suffered severe repression, the harshest regime was most likely experienced by Hungarians under Mátyás Rákosi.

The situation in the entire communist camp began to change in 1953 after the death of Stalin. Internal power struggles within the communist party gave people hope that the situation would improve, at least to some extent.

On 28 June 1956, Poznań workers declared a strike in H. Cegielski factory (which at that time was named “Joseph Stalin Metal Works”). The demands put forward by the workers had an economic, social and political character. One of the demands was for the Soviet troops to leave the territory of Poland. The protesters took to the streets of Poznań, and the column of demonstrators was quickly augmented by the inhabitants of the city. The communist authorities decided to use weapons against the demonstrators, which escalated the conflict and turned it into a protracted armed clash. The protesters managed to seize a substantial quantity of weapons and two tanks. The city was pacified the following day. The number of casualties on both sides is a subject of debate, and is estimated at several dozen to several hundred killed and many more injured. The communist regime attempted to keep the news on the Poznań events from anyone outside the city, by cutting all communication with the rest of Poland. However, the truth could not be kept hidden for long.

Polish citizens were traumatised by what had happened in Poznań. They found out that the “people’s power” was shooting at ordinary workers who, according to Marxist ideology, were supposed to be the foundation of this very power. The feebleness of the post-Stalinist authorities accelerated the transformations which resulted in the Polish thaw of October 1956 and a relatively gentle takeover of power by the faction of Władyslaw Gomułka. These events, in turn, paved the way for the protests of Hungarian students in Budapest, which were the beginning of the Hungarian Revolution of 1956.