On June 6-7, 2022, the 3SEAS Local Government Congress, the Economic Forum will be held in Lublin. This is a particularly important event not only for the Lublin region, but also for all 12 countries of the Initiative. 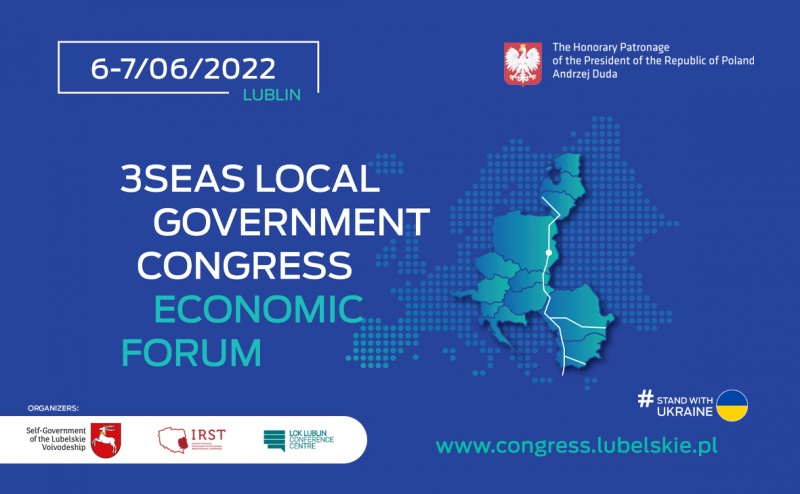 The first edition of the event (June 2021) gathered over 730 attendants. Among 81 panellists there were the leaders of key economy sectors, political figures and representatives of the public administration and local governments. In frames of 18 panels the subjects important for the development of Polish and foreign economy were covered, i.e.: diplomacy, energy, finances, economy, innovation, science, agriculture, transport, digital transformation, tourism, interregional and cross-border cooperation in the Three Seas Initiative area.

The event was hold under the honorary patronage of the President of the Republic of Poland Andrzej Duda who participated in the opening ceremony.

During the Congress the Lublin Declaration was signed. The document created basis for persistent and stable partnership of local and regional governments of the Three Seas Initiative countries. This document shall be in next years a tool for maintaining and establishing regular contacts and for undertaking of many common initiatives.

This year, the Congress will address the issues important for cooperation of the regions from the Three Seas Initiative area, also in the face of the armed conflict in Ukraine. The discussions will be divided into several thematic blocks dedicated to, among others, transport infrastructure, the Network of the Three Seas Regions, energy, digital learning, EU funds and agriculture. The event will be accompanied by the Economic Forum, including seminars, B2B meetings and study visits, all facilitating establishing new business contacts.

We cordially invite you to take part in the second edition of the event under the name of: