– We have reached an agreement with the President of France on strengthening Europe – Viktor Orbán, the prime minister of Hungary, announced in Budapest after Monday's summit of the prime ministers of the Visegrad Group countries and Emmanuel Macron. Politicians from France, Hungary, Poland, the Czech Republic and Slovakia came together to discuss the current geopolitical situation related to illegal immigration and the energy crisis in Europe. 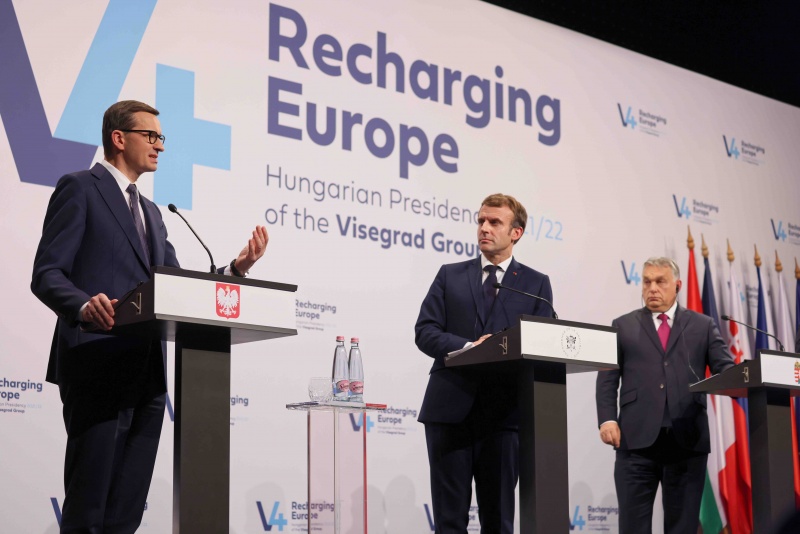 – We are in agreement with President Macron on the issue of patriotism, the strengthening of Europe and the European strategic autonomy – Prime Minister Viktor Orbán emphasized in a joint statement issued with Emmanuel Macron on Monday. After the meeting, the Polish head of government Mateusz Morawiecki announced that the leaders of governments of Central and Eastern Europe are concerned with how the European Emissions Trading System (ETS) operates and announced that Poland would call for an overhaul of the system at the upcoming European Council meeting.

During the French President's first visit to Hungary since 2007, Viktor Orbán stressed that the relations between him and Emmanuel Macron are based on respect, and since France is the historical home of the Encyclopédistes, he accepts the French President's recent definition of their relationship: "We are political opponents but at the same time European partners".

The French leader noted publicly that although the two politicians are divided by political disagreements, the respect for the rule of law, media pluralism and the fight against discrimination all lie at the heart of the European project – and that both he and Viktor Orbán are ready to "work together for Europe". Emmanuel Macron explained that shared European thinking is necessary to better protect external borders and work together for the good of the European Union. The French President also reminded in Budapest that "France is a loyal and pro-European partner".

Referring to the issue of the so-called "rule of law", raised during the summit of the V4 leaders and France, the head of the Polish government explained that he had "one particular thing" to say on the matter. – A basic principle guides us: what is permitted in one EU country, for example, in France or Germany, must be allowed in all other EU countries. Otherwise, we are faced with discrimination – Prime Minister Mateusz Morawiecki underlined while reminding us that "the European Union is a group of 27 sovereign states with equal rights".

Energy as a priority

During the summit, Emmanuel Macron outlined the programme and priorities of the French Presidency of the Council of the EU, which begins on 1 January 2022. In the opinion of the French President, a deep reform of the Schengen Area is essential, as well as boosted protection of the European Union's external borders, restrictions on the so-called secondary movement of migrants and a review and possible modification of the currently applicable deportation rules.

The Polish Prime Minister also agreed with the need to change the EU migration policy. – We must be able to protect our external borders. We must prevent human trafficking and the use of people as human shields, as Lukashenko and his principals are now doing against the countries of the European Union. This is the guiding principle in defending the EU's borders and uniting the Member States in the migration policy, Mateusz Morawiecki emphasized.

The Hungarian Prime Minister explained, in turn, that both he and the French President also agree on the need for a "strategic autonomy for Europe". – There can be no strategic autonomy without a European defence industry, nuclear energy capacity and self-sufficiency in agriculture. For this reason, we support a common European defence policy, endorse nuclear energy and promote the importance of European agriculture – said Viktor Orbán at a joint press conference.

The Polish Prime Minister, Mateusz Morawiecki, observed that the current energy crisis stems from two fundamental challenges. – The first are the very high gas prices and manipulations, which unfortunately have a major impact on energy prices in general. These are, above all, manipulations on the part of Gazprom, and here we expect a clear-cut report from the European Commission on the matter – added Mateusz Morawiecki. – Hand in hand, together with the Visegrad countries, but also with Emmanuel, we worked hard to introduce the possibility of gas and nuclear investments into the EU taxonomy – said the Polish Prime Minister.