In June 1583, an event of such an rich artistic grandeur and gravity took place in Kraków that it was mentioned in the most important chronicles of Polish history. The closest associate of King Stefan Batory (1533-1586) and the commander of the Polish army during the siege of Pskov - Grand Chancellor and Grand Hetman of the Crown Jan Zamoyski (1542-1605), hosted a grand reception to celebrate his wedding to Gryzelda, King Stefan Batory's (fig 1) niece and the daughter of Prince Christopher of Transylvania. 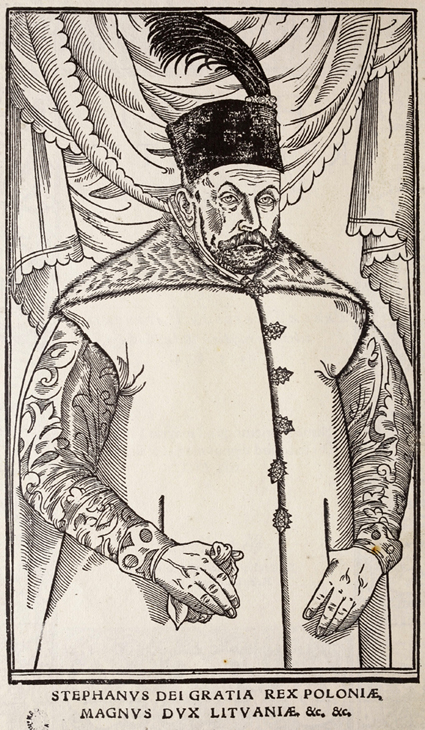 . A woodcut of Stefan Batory's portrait in the frontispiece of Bartosz Paprocki's The heraldic arms of the Polish knighthood, Kraków 1584. Source: POLONA, The National Library in Warsaw

The celebrations which lasted a whole week with the King and Queen in attendance, full of splendour, also provided an opportunity to triumphantly celebrate the great victory of Polish troops in the Livonia campaign against the Muscovites (1577-1582). As a result, Russian forces were expelled from this province and Połock and Russia lost access to the sea for many years. Faced with the Swedish invasion, Ivan IV himself sued the Polish king for peace. According to the great Russian historian Nikolai Karamzin, whose words were happily quoted by Count Edward Raczyński in the Cabinet of Polish Medals (1845), the Tsar instructed his envoys that 'they should not only be slow, but even bear insults and beatings' in negotiations with the Poles. The atmosphere of those days was cemented in the collective imagination of Poles by Jan Matejko's famous painting "Stephen Báthory at Pskov" (1872), kept in the collections of the Royal Castle in Warsaw (fig. 2). 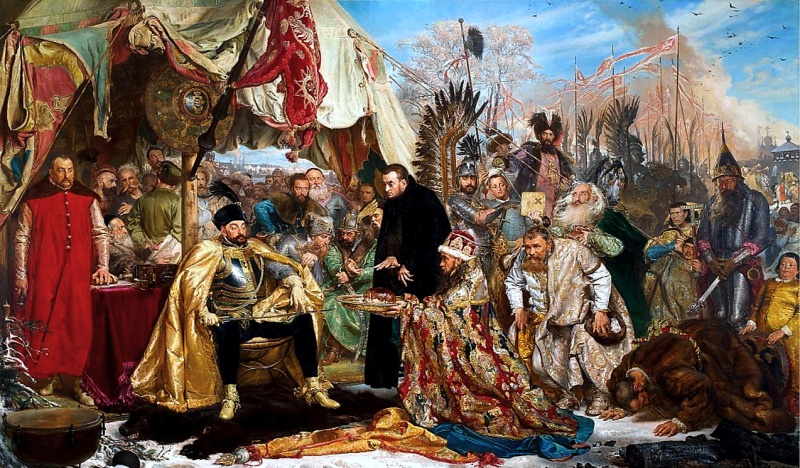 A detailed description of the extremely lavish procession, during which the hero from Pskov – Jan Zamoyski, like a triumphant Roman leader, was escorted with his wife at the end of the ceremony by the most eminent wedding guests, was presented by Joachim Bielski in the Polish Chronicle (Kraków 1597). The real attraction of the triumphant procession was an 'elephant' who carried a tower 'blazing away with flares and loud bangs'. The chronicler says: "Three carts carried depictions of the war which raged in Russia for three years: the taken towns, castles, rivers and forests which the troops crossed, sieges and sackings of castles. Then came armour, arms, shields, lances, trees and other various Muscovite weapons. Following these, people of both classes as if imprisoned and great deal of spoils of war. Livonia in the shape of a female was neatly dressed in a green wreath (...): with all the estates of that land neatly depicted. And the Muscovite trampled under her feet. (...) They were followed by a triumphant wagon, the highest of all wagons, drawn by four white horses, with a Muscovite bound with a chain at the back of it. And behind wagon a large group of prisoners dressed as Muscovites: hetmans, governors, and other common people following, and behind all those a clown who mocked their initial threats and at the loud grunts of the Grand Duke of Moscow". In this triumphant procession, the Polish nobles displayed carts richly decorated in an antique fashion, which they themselves rode upon dressed as Roman gods: Saturn, Jupiter, Diana and Venus. All this was to celebrate a great victory for King Stefan Batory and Jan Zamoyski - a companion in the expedition against Russia, newly married to his Transylvanian family.

A silver coin ("thaler") commemorating Stefan Batory and his recovery of Livonia and Połock, handed out in Kraków in 1583 during Jan Zamoyski's the wedding ceremony. Source: Dawid Janas Antique Shop, 2019

4. A woodcut representation of the reverse of the "For the recovery of Livonia and Połock" together with a comment about its distribution in Bartosz Paprocki's The heraldic arms of the Polish knighthood. Source: POLONA, The National Library in Warsaw 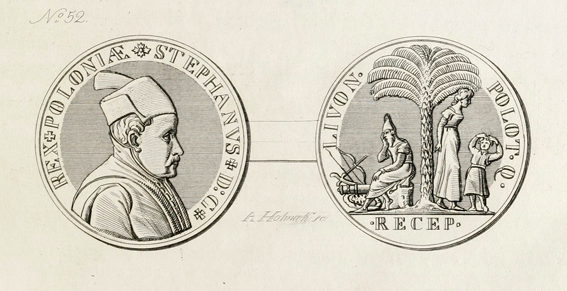 The culmination of this peculiar spectacle was the scattering among the gathered audience of silver coins with a bust of Stefan Batory in Hungarian attire on the face (Fig. 3, Fig. 4), whose head, according to Raczynski, was adorned by 'a Hungarian cap with a tuft of heron feather'. The image of the king was accompanied by the Latin legend STEPHANVS D(ei) G(ratia) REX POLONIAE ("Stefan King of Poland by God's grace"). The reverse side of the coin showed a "palm tree with an old man sitting on a mound underneath it, supporting his head with his right hand and looking at the collection of weapons lying in front of him. On the other hand, there is a woman, with her hands tied behind her, next to her a grieving child tugging at its hair out of grief" (Fig. 5). This scene seems to reflect the staging, during which the participants and spectators, generously awarded, could see a live version of Jan Zamoyski's procession, see the defeated and humiliated Russian. And the coin preserved that comforting image for ages to come. The legend of the reverse side of coin left no doubt as to which Stefan Batory's victory is celebrated: LIVON(ia) POLOT(ia)Q(ue) RECEP(ta), which means "Livonia and Połock recovered"