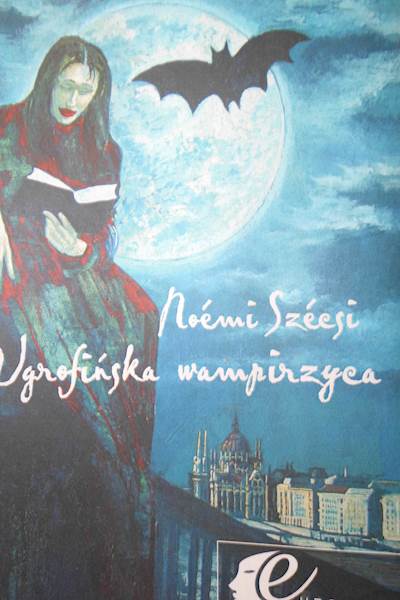 According to John Douglas, pioneer of criminal profiling and founder of FBI’s Behavioural Science Unit, the serial killer phenomenon is as old as the human race itself. However, before its heyday in the mainstream media fuelled by American popular culture, the most blood thirsty criminals and deviants were a source of superstition and fear. Although they were people of flesh and blood, demonic attributes were attributed to them. This is where, according to Douglas, various folk tales about mysterious beasts, devils, werewolves or vampires come from. Talking of Hungary, the story of Elizabeth Báthory, who loved bathing in the blood of virgins, comes to mind immediately.

Only that there is another interesting aspect to the subject of vampires. Even though the creature was taken over by pop culture, it is always worth remembering that it is a contribution from Central and Eastern Europe. Despite rumours that the vampire motives actually come from China, and the word itself - from Turkish. Today, when reaching for any cultural texts devoted to these characters written by authors from Romania, Hungary or Poland, you unwittingly feel that you somehow reflect them in yourself. There is also the indispensable curiosity about how they approached this unearthed topic. Did they bring a breath of freshness to it, instilled it again in the native tradition?

And a similar feeling comes from reading "Finno-Ugrian vampire" - Noémi Szécsi's debut novel. In Hungary, the book was published in 2002 and three years later in Poland where it went largely unnoticed by our readers'. Szécsi was born in 1976 in Szentes. She graduated classical, Finnish and English philology. And, as she writes about herself, a bitter, cynical, and even mean person, who makes everyone upset and offends everyone. And when reading her small debut, it's hard to resist the impression that the main character and narrator probably have a lot in common with the writer - from education to character.

The heroine is Jerne volta-Ampere – a young and antipathic vampire, who lives with her grandmother who has been dead for two hundred years, in the attic of a Budapest town house. Jerne has one dream in her life (because she is still breathing) - she wants to write and publish fairy tales for children, which arouses extreme contempt and opposition in her grandmother. Of course, the grandmother wants her granddaughter to be just like her. She should become a living corpse without undue delay, start hunting men, sucking blood out of them and enjoying earthly eternity. Of course, against this backdrop there are many quarrels and minor mischief between them.

Of course Szécsi's novel is neither a typical horror, which is supposed to submerge us in shallow entertainment above all, nor is it a tearful romance with vampire interjections, which have recently popularized American cinema and literature. What is it then? As it is – due to the cultural roots of vampires mentioned above – it is difficult not to read it as a reinterpretation of the myth of a bloodsucker immersed in postmodernism. Above all, however, from the very beginning we know that we are dealing with satire, in which vampires play only the role of tools for telling stories about living people and their ailments.

And here's the problem. For if we assume that Szécsi in her prose is not only venting personal traumas, but is also trying to reflect more widely on the Hungarian soul – and this is how the book was advertised – then it turns out that this soul is not doing so well. Or at least that's how it was at the turn of the millennium. According to Szécsi, Hungarians entered the new century as people who were stifled by the burden of their own past and tradition – embodied by their grandmother in the novel – and were extremely ashamed by their provincialism. The 'Finno-Ugrian' adjective - as Jerne's grandmother explains, sounds more intriguing when talking to foreigners than just a 'Hungarian' which means nothing.

Crippled under the weight of this centuries-old baggage, young Hungarians fruitlessly try to make anything of themselves, build a career, simply be happy in their own way, but they fail each and every time. Jerne, although talented when it comes to literature, cannot publish her fairy tales because the publisher tells her that they are too obstructive and brutal for children's stories. In addition, her efforts are torpedoed by her grandmother, who not only thinks that she is not a job worthy of a real vampire, but is also afraid that her granddaughter's artistic activity may give them away. As a result, she terrorizes Jerne, making her stay in the mausoleum of an apartment, and thus nurture the belief that her fate has been determined.

And in a way, it really is. Jerne finally dies and is reborn as a fully-fledged ghoul, which can be symbolically read as a surrender to Magyarism. But even then she is still struggling because even though she discovers some positive sides to vampirism – you know, nature cannot be fooled – she still unsuccessfully tries to "live" her own way and all the time she encounters resistance. In fact, it is only the final death of the grandmother, her turning to ashes, that emancipates her and makes her reconcile the vampire elements with the desire to construct existence in its entirety for her own sake. She finally becomes full and whole. She brings together modernity and tradition.

But Szécsi's satirical blade goes even further – to the political dimension. Although there are no open political allusions, it is worth noting that the novel was written under Viktor Orbán's first government. This state of affairs is particularly irritating for Grandmother Jerne, who, as a racial vampire, never tamed by modern times, cannot stand the sudden increase in Christian feelings in her compatriots. She even suffers physically because of this: her finger withers. And the question is how vampires allergic to crucifixes would cope in today's Hungary when it was already so bad then.

Anyway, the grandmother also has a certain identity paradox within her. Though seemingly dominating and liberated, she seems to be affected equally by the ailment that paralyses all the characters in this book. She also cannot free herself from images of the glorious past. She is not able to stop sleeping in a coffin and in general one can get the impression that the modern day has put her up against a wall. And maybe that explains why she's keeping Jerne on an emotional leash. She does this because the desire for control mixes with fear of the world, which still seems to be a perfect feeding ground for her, but also somehow stuns her.

Impossibility, frustration, alienation – these three terms come to mind while spontaneously whilst reading this novel. They envelop the plot and scream out of every line. On the other hand, as Jerne herself states, everything can be a fairy tale and a lie, so all that remains is to hope that reality looks a little better. And that real vampires have sharper fangs after all.

Marcin Królik - born in 1979, writer, publicist and blogger. He studied Polish philology at the University of Warsaw. He made his debut in 2013 with the "Drzewo różane" ["Rose Tree"] novel He also writes essays and reports, where he focuses on broadly defined spiritual and civilisational issues.