On this year’s anniversary of the end of World War II the Kremlin pursued its propaganda goals. Polish special services have identified a number of hostile narratives targeted against Poland, but also against other countries.

Russian historical propaganda is an important tool of influence in the Moscow’s dealings with other capitals. The myth of “the Great Patriotic War” has become a cornerstone of Russia’s internal and foreign policy. Anyone – a country or an organization – who opposes the manipulated version of history spread by Russia comes under fire from its authorities. Around and during this year’s anniversary of the end of the Second World War, Russian propaganda pushed a number of narratives aimed to fulfil the Kremlin’s strategic objectives.

The activities undertaken by Russia are constantly designed to promote its narratives and whitewash the role of the Soviet Union in starting the war, but also to denigrate Poland and the policy pursued by the pre-WWII Polish government, stir up tensions between the EU member states and NATO Allies, and erase the Kremlin’s responsibility for the crimes committed during the war, including the Katyn Massacre. By means of injecting propaganda and disinformation into the international debate, Russia has been trying for years to impose its false historical narrative which in turn is aimed to produce concrete benefits in its current political agenda. Additionally, Moscow tries to legitimize its imperial policy.

Below is a sample of the recently identified Russian propaganda activities:

On an all-English website of Strategic Culture Foundation, with some Western journalists promoting the Kremlin’s point of view as contributors, an article by a Canadian historian, Michael Carley, has been posted. The text is simply a collection of Russian historical narratives, particularly those regarding World War II. In the manner typical for the Kremlin, Carley accuses Polish authorities of that time of colluding with Hitler and echoes propaganda claims that behind Soviet Union’s intervention was the need to retake Ukrainian and Belarusian territories annexed by Poland in 1920. The author also blames the London-based Polish Government-in-Exile for exploiting the discovery of the Katyn Massacre mass graves to break the unity of the Allies. Another Kremlin-style accusation thrown at Warsaw is that it destroys the Soviet monuments in Poland and lies about “the liberation” of Europe by the Soviet Union.

On the website of the Russian Institute for Strategic Studies (RISS) – a think-tank with ties to Russia’s special services – an analysis has been posted of how the West falsifies history and uses it for political purposes. RISS suggests Brussels instrumentalizes history with the aim to use it in a confrontation with Russia. The West is also accused of intentionally neglecting the sacrifice of the Red Army soldiers during the Second World War. It is typical for Russia to portray itself as a victim of Western injustice.

RISS is an analytical wing of Russia’s Foreign Intelligence Service (SVR), fully-controlled by the Kremlin. It is headed by M. Fradkov, the former long-time Director of SVR. In 2017, upon the motion of Poland’s counter-intelligence service – the Internal Security Agency (ABW) – a representative of RISS was expelled from Poland in response to his hostile activities. 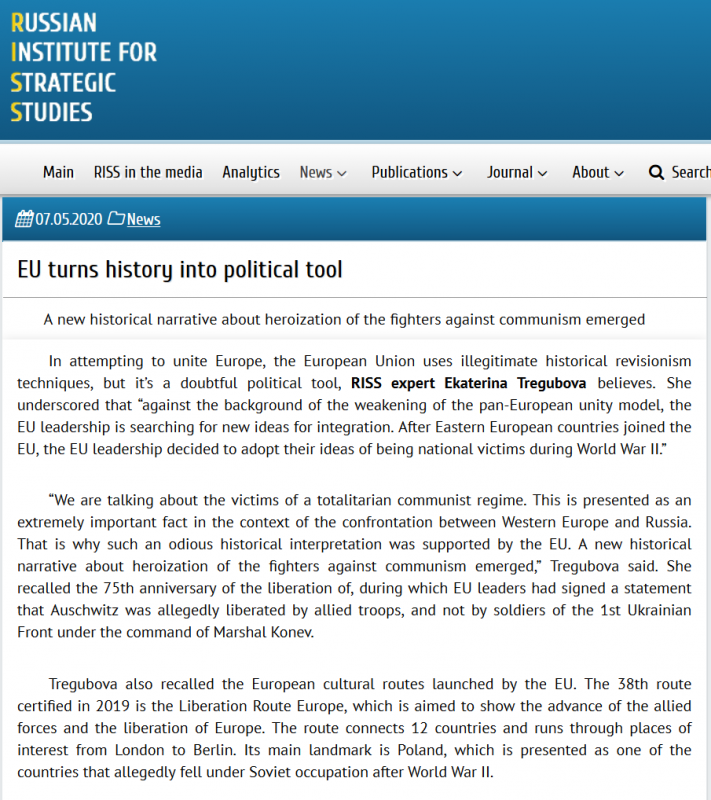 The Russian International Affairs Council (RIAC) has attacked the CEE countries with a narrative that their accession to the EU “negatively” shaped the West’s stance on history, World War II and “liberation”. The author of the said op-ed makes a direct attack on Poland by claiming that behind its stance on the war is an intention to conceal its own wrongs. By this he means the alleged “complicity, on an everyday basis, of the Poles in the Holocaust” which is being covered with “a national myth” of “highlighting that Poland fought with two totalitarian regimes”.

Within a short time period, two major Russian think-tanks pushed an identical narrative that the accession of the CEE countries to the EU negatively affected the relations between Russia and the West.

With this op-ed Russian propaganda drives a wedge between CEE and France by highlighting that the French President, E. Macron, is in favour of a positive approach to history. Such narrative aims to portray CEE as an obstacle on the path to pursue common interests. 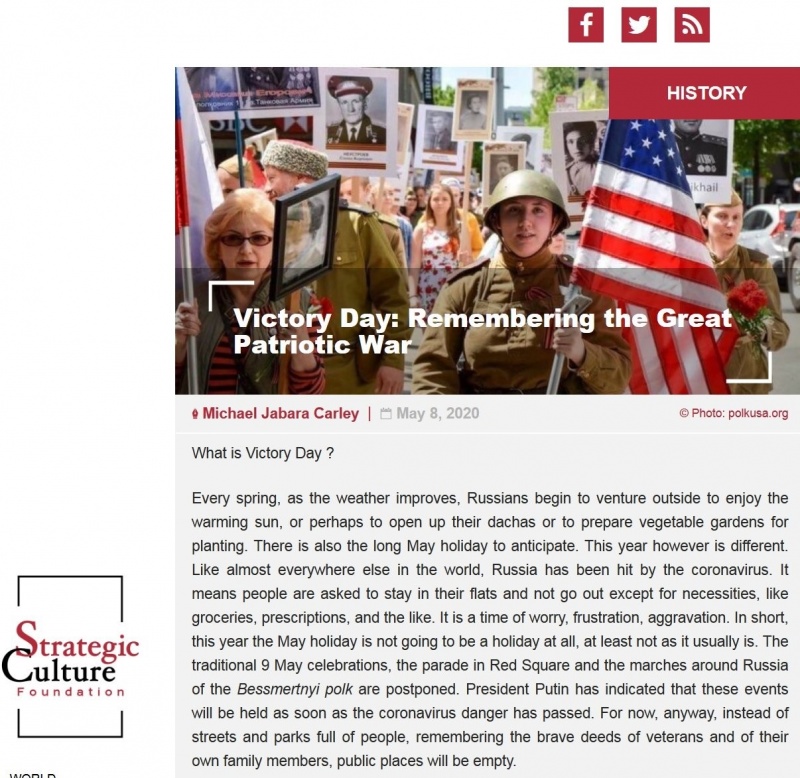 The Russian media have commented on Poland’s reaction to the removal of plaques commemorating the victims of the Katyn Massacre erected on the building of Tver State Medical University which in 1935-1953 was the seat of the NKVD Regional Board in Kalinin (now Tver). The Russian narrative goes as follows: “Thanks to Russia historical justice has been served, which drives Poland crazy”.

Russian propaganda uses the opportunity to accuse Poland of having forgotten about “a massive dismantling of monuments in memory of the Red Army soldiers who liberated Poland from Nazi-fascist occupation”.

This campaign aims to show that Poland reacted with “hysteria”, whitewash Soviet war crimes, criticise the process of decommunisation in Poland, strengthen the myth of the Soviet Union as “liberator” of Europe, manipulate the real picture of the Kremlin’s activities during the Second World War, and provoke further reaction from the Polish authorities. 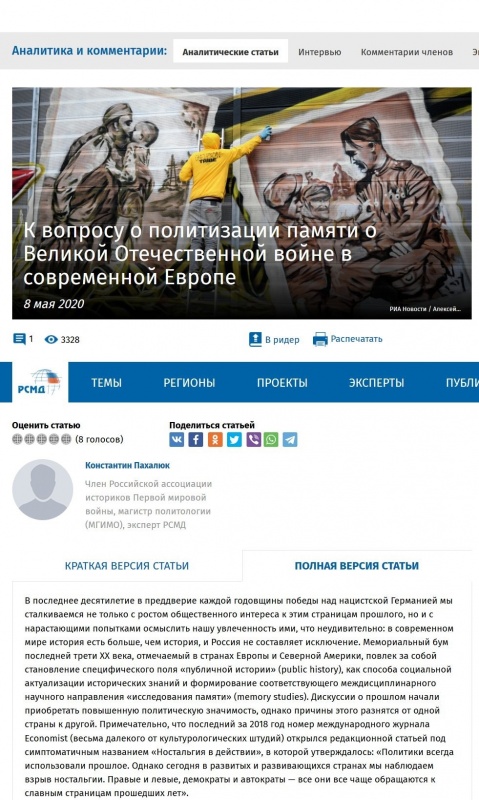 The Kremlin’s propaganda mouthpiece – RT – has manipulated the history of World War II with the aim to whitewash the Soviet Union’s past. Neil Clark’s op-ed has been entitled “27 million reasons why we must remember Victory Day and stand up to attempts at rewriting history”. This UK-based journalist claims that “in recent years the Soviet contribution to the defeat of Hitler has been downplayed in the West or, even worse, ignored altogether”. The author criticises those who raise the issue of the Soviet complicity in starting the war. He amplifies a widespread false narrative that the Soviet Union was the only country trying to “contain Adolf Hitler”. The blame for the Second World War is put on the Western powers. Clark neglects the fact that after 1945 CEE was under Soviet occupation and claims that with time communist regimes became softer.

Posting this article aims to blur the Soviet Union’s for its invasion of Poland in 1939, whitewash Soviet war and post-war crimes, and portray Russia as a victim of Western injustice. 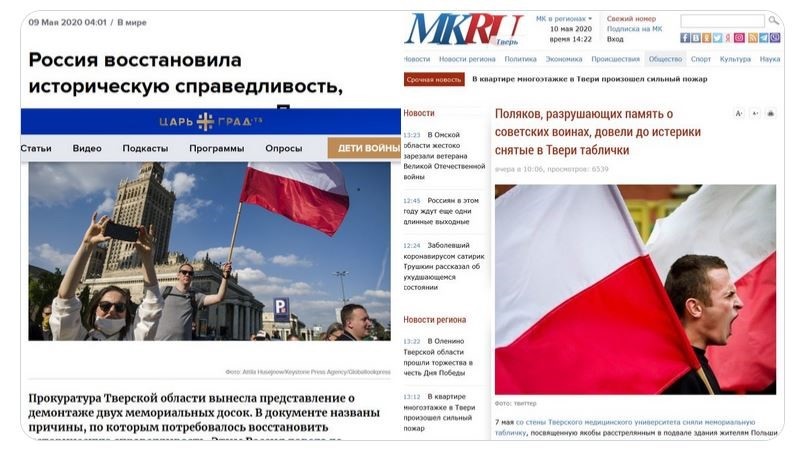 Ahead of the anniversary of the end of World War II, Russian propaganda engaged in promoting a book that reiterates (after Kremlin) manipulated narratives regarding Hitler-Stalin Pact, whitewashes the actions of the Soviet Union during the war and accuses the West, including Poland, of erasing the memory of “liberation”. 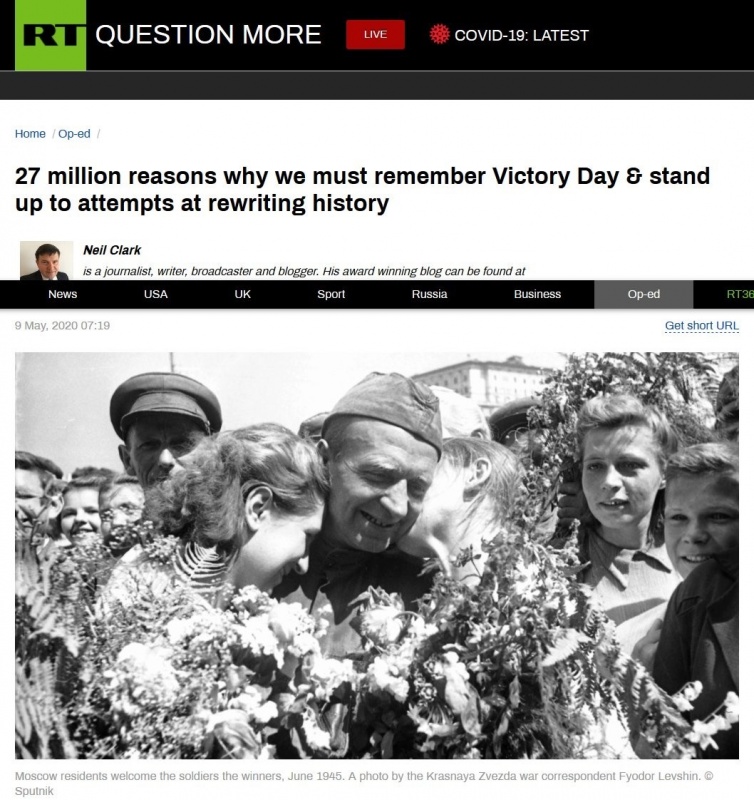 A Russian news website notorious for pushing the Kremlin’s propaganda has quoted the German Foreign Minister as saying the Third Reich takes full blame for the Second World War.

The said news website takes the opportunity to attack Poland and the Baltic States by claiming that regardless of historical facts and the words of the German Foreign Minister these countries rewrite and deny history and lay the blame on the Soviet Union.

This is yet another attempt by Russian propaganda to whitewash the crimes committed by the Kremlin, e.g.by manipulating the circumstances leading to the outbreak of the war.

This manipulation aims to whitewash the Soviet Union’s wartime actions, drive a wedge between Poland, Germany and the Baltic States, create information chaos, strengthen the image of a Russia victimized by Western injustice, and underpin the myth of the Great Patriotic War. 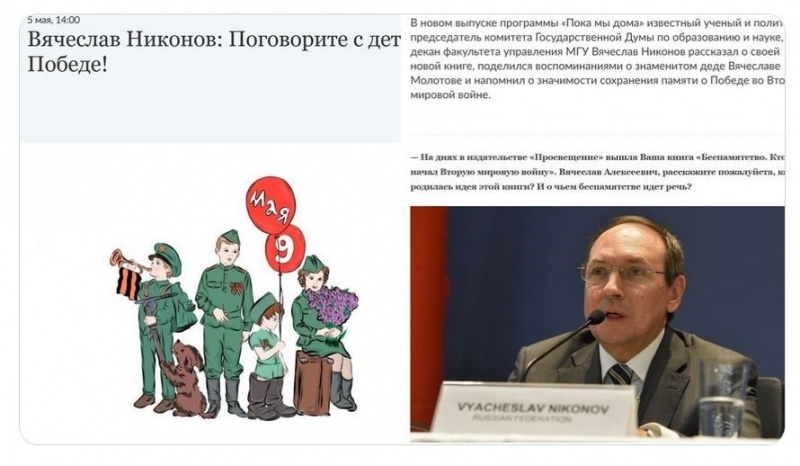 Russia denies the facts substantiating the Kremlin’s complicity in starting and waging World War II and rejects any attempts by Poland and the West to remind the world about Soviet crimes. “We do not have a sense of guilt and can’t have one. The Soviet Union brought 27 million lives to the altar of Victory” – said the Russian President V. Putin in an interview for A. Kondrashov’s documentary “War for Memory” on the Rossiya 1 TV channel. Russian propaganda constantly highlights “the achievements” of the Soviet Union during the war, which is to serve as a rationale for the Kremlin’s current imperial policy. For this reason Moscow scolds anyone daring to remind about the dark pages of the Kremlin’s past.

The Russian narrative goes as follows: “the #Soviet Union’s role in defeating Nazi Germany is a sufficient argument in favor of erasing from history the cooperation between Stalin and Hitler, their joint invasion of Poland in 1939 and crimes committed by the Soviets during and after the war”. 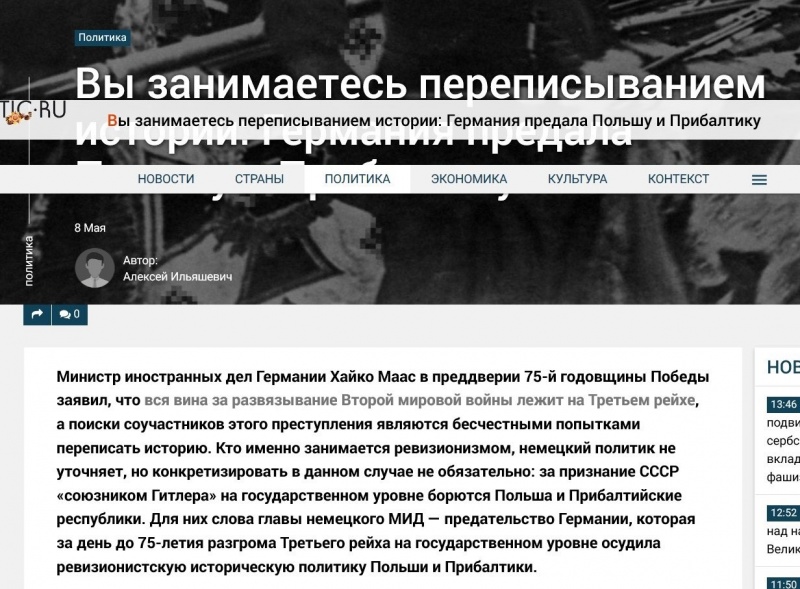 In a TV interview, the Russian President V. Putin has again pushed propaganda about the Second World War by claiming the annexation of lands beyond the Olza river by Polish troops in 1938 was a result of “a secret collusion between Poland and Nazi Germany”. Putin seized the opportunity to blur the Soviet Union’s responsibility for Hitler-Stalin Pact and accused the pre-WWII governments of European countries of having colluded with Hitler. He also portrayed the Soviet Union as the only power to have opposed Nazi Germany.

Putin’s claims serve to strengthen an ongoing Russian campaign of manipulation of history aimed to whitewash the Soviet Union’s role in starting the war, accuse the West of having supported Hitler, erase the memory of the #Hitler-Stalin Pact of 1939, and portray Poland as a country whose actions accelerated the outbreak of World War II.

Ahead of the anniversary of the end of World War II, Russia stepped up its historical disinformation activities against Poland, but also against other countries. By means of manipulating historical facts and waving the “previously unknown documents”, Russia accused the Finns of having carried out a genocide of the Slavic prisoners of the Continuation War. 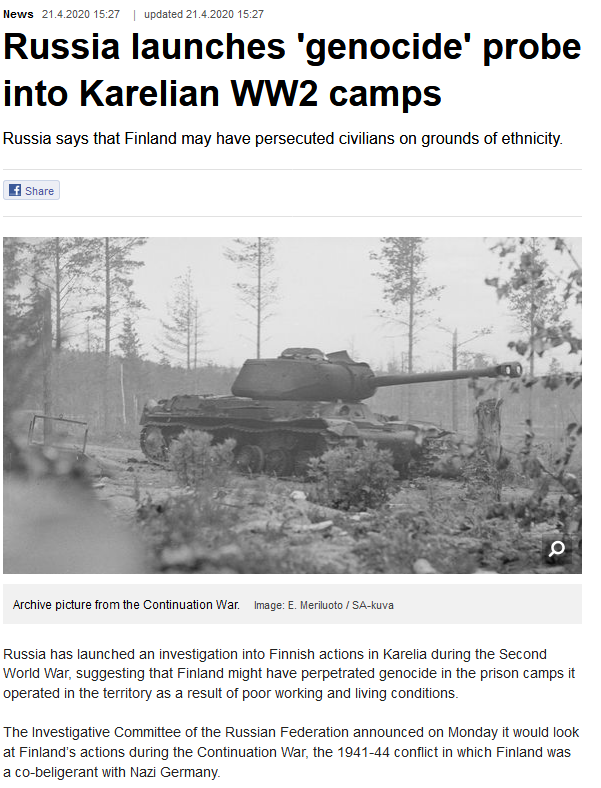 All the aforementioned actions undertaken by Russian propaganda aim to: