Every year Katowice hosts the Polish-Hungarian Friendship Chess Tournament. A few hundred players from a dozen or so countries take part in the competition. This is the largest open chess tournament in Poland. Children and adults, as well as a number of grandmasters face each other across a chessboard. Last year nearly nine hundred players registered. The tournament is set to be held for the 8th time in 2020. The idea to host this event was coined during a meeting by representatives of two twin cities – Miskolc and Katowice. The capital of Silesia was designated as the venue. The Swiss-system tournament features nine rounds. Those who end up in top places can expect significant financial prizes. Players from Hungary are recognised in a special way – additional financial bonuses are in store for the best Magyar. After the last competition, Łukasz Turlej, Vice President of the International Chess Federation and also Director of the Polish-Hungarian Friendship Tournament said: "When it comes to chess Hungary is a very strong chess country, with a deep-rooted chess tradition in many cities. We are glad that they come here, so that we can exchange experiences. Cooperation between Katowice and Miskolc as well as the Polish-Hungarian friendship has been cultivated for many years in Katowice". 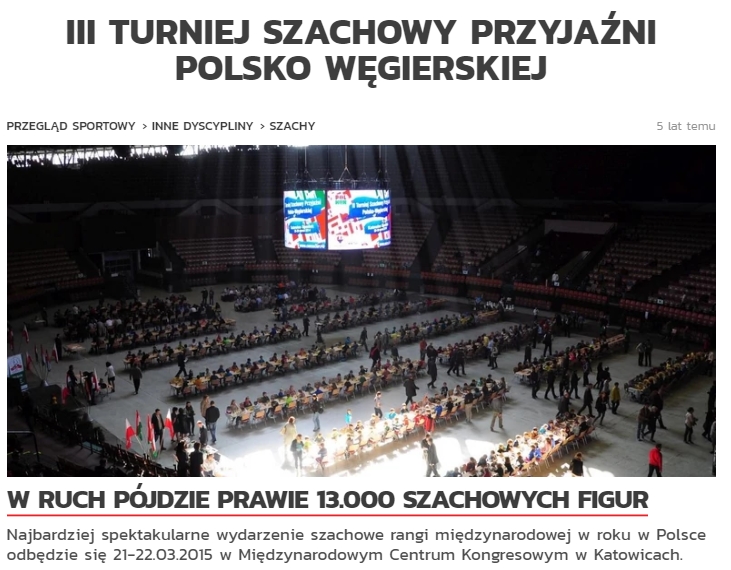 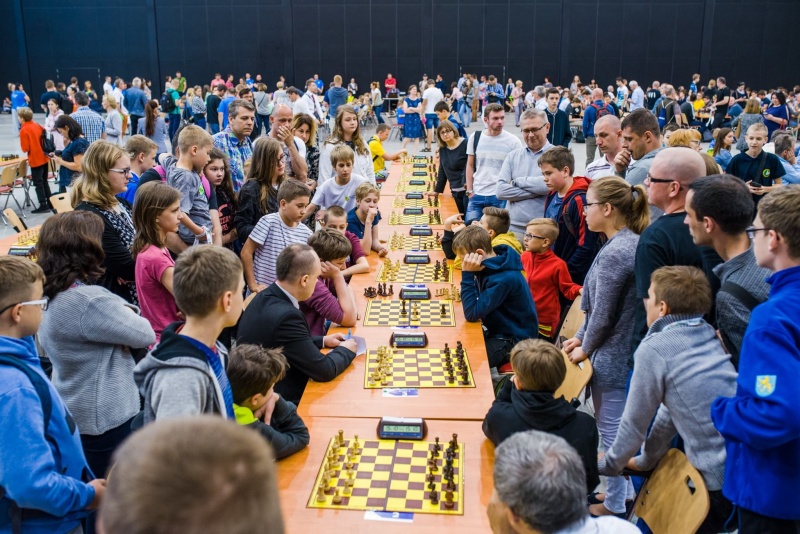 Chess, known as the "King's Game" is a strategic game which originated in India in the 6th century AD. It was one of the favourite pastimes of emperors, rulers and monarchs. Chess was a significant part of the aristocratic culture in the Middle Ages and Renaissance. Casimir the Great even set forth his attitude towards chess in state legislation. The passion for the game was kindled in him by the Andegawen family monarchs. Their great enthusiast - King Charles Robert, the first of the dynasty on the Hungarian throne - even gave a chess set to King John the Blind of Bohemia during their meeting in Visegrad in 1330. It was made out of jasper and sapphire and the pawns were made of gold and precious stones. Chess was also adored by Louis the Great, Władysław Jagiełło, Casimir Jagiellon and Sigismund I the Old. The latter, while staying at the Hungarian court of his brother Vladislav at the end of the 15th century, passionately devoted himself to the game and lost a lot of money. During the Enlightenment it was commonly believed that chess was a tool for self-improvement.a. 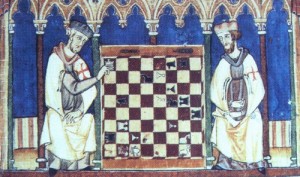 Chess was already played by the Knights Templar

The oldest records of the game related to the Magyars come from Chernivtsi, located in present-day Ukraine. A glass chess set was found in the grave of a Hungarian merchant from the 9th century On the other hand, during the Nagyvázsona excavations in present-day Hungary, chess pieces from the 15th century were found. The Hungarian Chess Association was founded in 1911.  Thirteen years down the line the Magyars were among the fifteen founding countries of the International Chess Federation (FIS).

The Hungarian Polgár sisters - masters from Budapest, come from the world's most famous chess family. The sisters' father, László, was born on 11 May 1946 in Gyöngyös. He was a teacher by profession. Although he was an average chess player, he was engaged with theoretical issues related to it. He was a proponent of the idea that "geniuses are created, not born". He spelled out his views on upbringing in the book "Raising a genius!". Shortly after he married a Ukrainian woman, Clara Altberger, who gave him three daughters: Zsuzsa, Zsófia and Judit. László decided not to send his children to school. He was personally involved in their education and taught them to play chess, even for up to 10 hours a day from an early age. Even though the controversial methods were heavily criticised, László was staunch in pursuing his plan. The girls' development was comprehensive, and not only within the scope of the "King's Game". Each of them currently speaks between four and eight foreign languages! 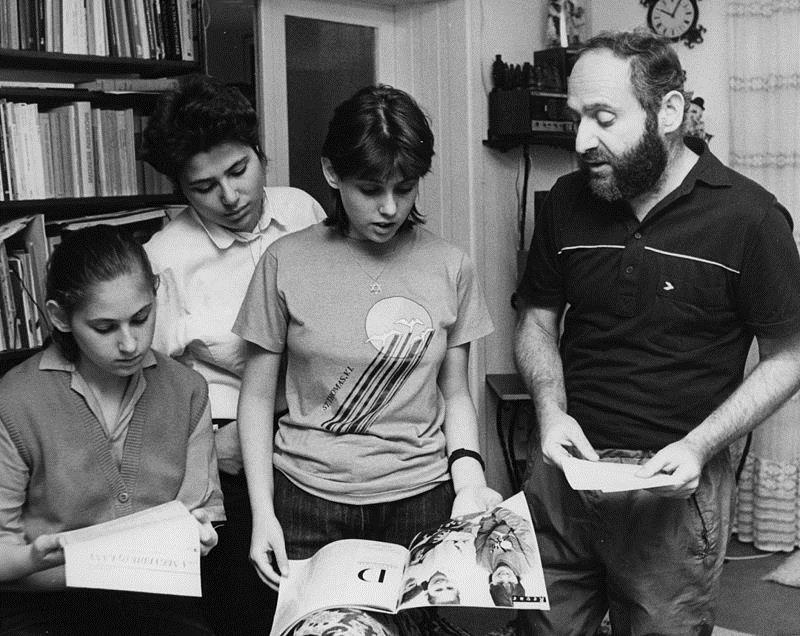 László Polgár with his daughters (from the left: Judit, Zsuzsa and Zsófia)

The eldest of the sisters, Zsuzsa Polgár was born on 19 April 1969 in Budapest. At the age of four, she took part in the first tournament in her life. It was the Budapest Chess Championship for children under 11. Zsuzsa, despite the significant age difference, won all ten games and won first place in the competition. At the age of twelve she won the Junior World Champion title. And three years later she was already the best chess player in the world! Even before she reached adulthood, she started taking part in men's tournaments, in which she was very successful. For a long time she was in first place in the ranking of the best female chess players in the world. She was only knocked off the top spot by her younger sister, Judit. Zsuzsa was the first woman ever to win the title of a male chess grandmaster. She won games with the world's best chess players, including Anatoly Karpov and Victor Korcznoy. She also won six Olympic medals: three golds, two silvers and a bronze. Zsuzsa also set the world record in simultaneous chess. For over 16 hours she played 326 games, of which she lost only three. She emigrated to the United States in 2002. She runs a chess school there and foundations promoting the game among young people and women. 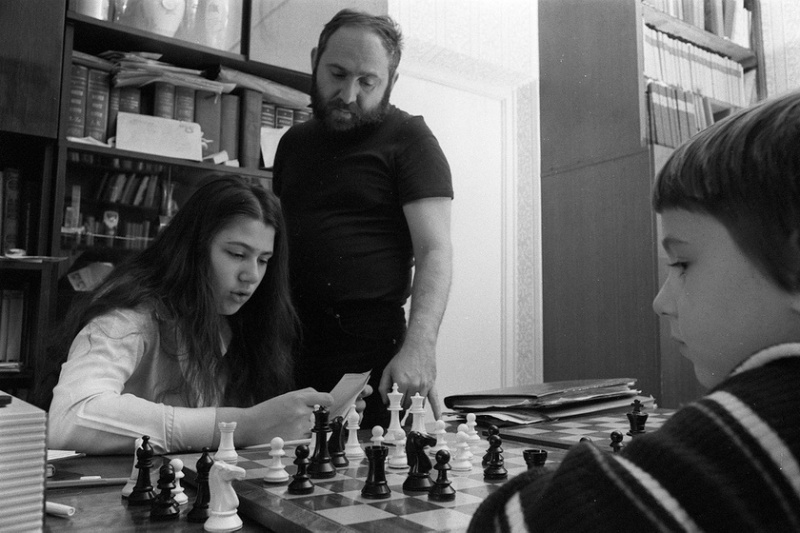 Zsuzsa Polgár with her father in 1982. Her sister, Zsófia, is on the right.

László's second daughter, Zsófia, did not achieve as much success as the other sisters. But she was an outstanding chess player. She was born on 2 November 1974 in Budapest. As a teenager, her results were excellent. Her spectacular victory at the tournament in Rome, where she defeated many chess masters at the age of fifteen, went down in history. Her parents thought she was the most gifted of her sisters. However, she did not use its full potential. Her best classification in history was tenth place in the women's ranking. The reason for this was Zsófia's numerous interests – painting, sculpting and design. After marrying an Israeli chess master, she moved to Israel. Today she works as a graphic designer, book illustrator and teacher of the "King's Game"..

The youngest of the sisters, Judit, was born on 23 July 1976 in Budapest. She enjoyed her first chess successes as a little girl. She defeated many older players already at the age of six. After a series of victories, at the age of twelve she won the Olympic gold with the Hungarian women's team. In the meantime, she was awarded the title of a female Grandmaster and took first place in the world ranking of women. As she had no equals, she decided to play only with men from then on. In 1990 she won her second Olympic gold. A year later, at the age of fifteen, she won the Hungarian Men's Champion title, and then became the youngest male Grandmaster ever. She was the first woman to cross the barrier of 2700 ranking points, which gave her the opportunity to use the elite unofficial chess title - the "super-grandmaster". She achieved her best score result in 2005 - she was then the eighth chess player in the world without any gender division. For 26 years, between 1989 and 2015 Judit was continuously ranked first in the women's ranking of the International Chess Federation. She ended her sporting career in 2014. She was the only one of the sisters not to move out of Hungary. In Budapest, she established a foundation named after her, in which she helps children in their education and development through unique, original methods. The foundation's curriculum was incorporated into the official national curriculum in Hungary. In addition, thanks to the efforts of Judit, since 2013 development through chess is an additional subject in Hungarian primary schools The aim of the programme is to develop general skills and promote logical and creative thinking. A very important aspect of this method is that the teacher does not need to know chess, but uses its rules for general teaching. Mastering chess is not an objective, but a tool that is extremely effective in developing logical, creative thinking. According to Judit Polgár "these exercises can be combined with sport or literature and simulate various life situations". The youngest of the sisters is also the founder and main organizer of the World Chess Festival held in Budapest since 2015. 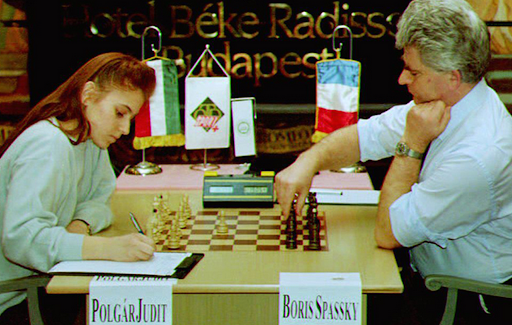 Two films were made about the Polgár sisters: The "The Polgár sisters. Bringing up female masters" film by Planeye+ and "Make a genius out of me" by National Geographic.

"The Polgár sisters. Bringing up female masters" – a documentary by Planeye+ 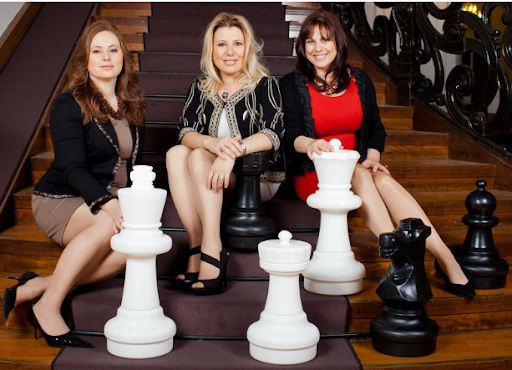 Today, the Polgár sisters promote chess among young people and women all over the world.